Mourning in Iran and Iraq for dead Shiite leader

TEHRAN, Iran (CNN) -- A funeral procession for a senior Iraqi Shiite leader wound through the streets of Tehran, the Iranian capital, on Thursday. 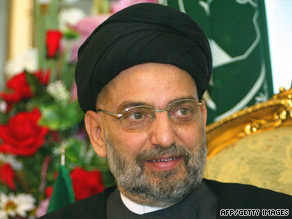 Mourners turned out to say goodbye to Abdul Aziz al-Hakim, who spent 20 years in exile in Iran before returning to Iraq after U.S.-led forces toppled Iraqi President Saddam Hussein.

The funeral procession started at the Iraqi Embassy in Tehran, said Haitham al-Husseini, a senior official with al-Hakim's office and one of his advisers.

Iraqi and Iranian government officials attended the procession with senior religious figures and some members of the Iraqi parliament.

Another funeral procession is scheduled to be held Friday in Baghdad, Iraq, before the casket travels to several parts of southern Iraq with large Shiite populations. Authorities are concerned about security since Sunni insurgents have targeted large Shiite gatherings in the past.

The Iraqi government announced the start of three days of mourning on Thursday, according to state television in Iraq.

Al-Hakim died Wednesday in Tehran after a lengthy battle with lung cancer. He was 59.

He will be buried in his hometown of Najaf, one of the holiest cities for Shiite Muslims, al-Husseini said.

U.S. Ambassador to Iraq Christopher Hill and the top U.S. commander in Iraq, Gen. Ray Odierno, described him as "a national hero" in a joint statement that expressed sadness over the death.

"Throughout his life, His Eminence demonstrated courage and fortitude, contributing to the building of a new Iraq," the statement said. "We offer our sincere condolences to his family and colleagues.

"His death at this critical stage that we are passing through is a great loss for Iraq," al-Maliki said.

Al-Hakim ended his exile in Iran in 2003 when he returned to Iraq after Hussein and his regime were toppled.

"It was very emotional for me to meet with my people after Saddam fell," al-Hakim said in a 2006 interview. "I was longing to see them, my goal in this life is to serve those great people and I am very proud to be a part of them."

During his exile, which began in the early 1980s, al-Hakim commanded the Badr Brigades, the military wing of the Supreme Council for Islamic Revolution in Iraq, or SCIRI. SCIRI -- a religious opposition movement to the Hussein regime -- was led by al-Hakim's brother until he was assassinated in August 2003.

Al-Hakim himself was also the target of assassination attempts.

SCIRI changed its name to the Islamic Supreme Council of Iraq (ISCI) in 2007 to remove the word "revolution," in an effort to reflect the situation in Iraq.

Al-Hakim had always propagated a message of peace, calling on Iraqis to stop taking part in the bitter sectarian conflict that followed the fall of Hussein. But despite his desire for a secular democracy in Iraq, he wanted a country that recognized the importance of religion, religious institutions and its authorities.

Al-Hakim successfully harnessed the fervor generated from emotional religious rituals like Ashura, a national day of fasting, and turned them into a powerful political platform. That ability led some to consider him Iraq's most powerful man.

His political bloc won the most seats in the Iraqi Parliament in 2005. And although al-Hakim never held a government position, he commanded respect from those who did.

He visited the United States three times during the Bush administration to address the situation in Iraq.

But al-Hakim remained artfully vague about Iran's influence in Iraq, saying its role was a positive one -- in direct contradiction to the U.S. government, which raised concerns about what it called Iran's "meddling."

Al-Hakim died at a time of violent political turmoil in Iraq. The power of the Islamic Supreme Council of Iraq (ISCI) party he leaves behind is just as uncertain as the nation he wanted to serve.

Al-Hakim was diagnosed with lung cancer in 2007 and was first treated in the United States, then later in Iran.

It was once Iraq's most powerful Shiite political party, but ISCI lost much of its influence following elections in January when politicians allied with Prime Minister Nuri al-Maliki won control of most of Iraq's provincial councils.