(CNN) -- A coroner's report says that a man arrested in the violent aftermath of Iran's presidential elections died from beatings, Iranian media reported Monday in what appeared to be the first official confirmation of a detainee's death from mistreatment. 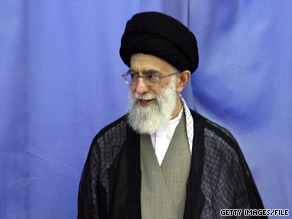 The death of Mohsen Rouhol-Amini was the result of "repeated blows and severe physical injuries" and other mistreatment at Tehran's Kahrizak prison, the semiofficial Mehr news agency reported, citing an informed source. Officials initially had said Rouhol-Amini had died from illness.

Kahrizak was ordered closed by Iran's Supreme Leader Ayatollah Ali Khamenei in late July amid reports that the facility did not meet required standards.

Rouhol-Amini was one of two inmates who died at the prison after they were arrested for protesting the results of the disputed June 12 election, Iranian media reported nearly two weeks after Khamenei's order to shut down the prison. In the wake of the deaths, authorities fired and arrested Kahrizak's warden.

At the time, Gen. Esmaeel Ahmadi Moghadam, commander of Iran's security forces, in announcing the arrest of the warden, said no one died at Kahrizak from physical abuse and that the inmates died from illnesses.

"The coroner is investigating the deaths in order to determine the source of their illness and the virus that caused their deaths," he said.

As of Sunday, state-run outlets, including the Islamic Republic News Agency (IRNA), still reported that Rouhol-Amini died of pre-existing conditions.

On Monday, the source with knowledge of the coroner's report told Mehr that pre-existing illnesses did not play a role in the death.

The coroner's findings, as reported by Mehr, offer credibility to reformists and human rights groups that have accused Iran's Islamic government of allowing the abuse, torture and rape of post-election detainees.

Government officials have tried to discredit the claims, while at the same time promising to investigate the allegations if they receive evidence. Khamenei himself met with Rouhol-Amini's father, Abdol-Hossein, on Sunday and vowed that "the system has no intention to forgive or be courteous to any wrongdoers," IRNA reported.

Abdol-Hossein Rouhol-Amini served as a campaign adviser to presidential candidate Mohsen Rezaei, a conservative. Despite challenges from his opponents, incumbent President Mahmoud Ahmadinejad was declared the overwhelming winner of the race, sparking hundreds of thousands of Iranians to take to the streets for more than two weeks to protest the election results.

More than 1,000 people were arrested in the government crackdown that followed, and Iranian officials said at least 30 people were killed in post-election violence, though the opposition put the number at more than twice that figure.

More than 100 Iranians arrested in the crackdown are going through mass trials this month. Top military officials have called for faster prosecutions and demanded "swift retribution" for post-election detainees, Iranian media have reported.

Khamenei last week warned the judiciary should not use "rumors" as the basis for their prosecution, and should try them on strong evidence.