(CNN) -- At least 1,000 prisoners are on death row in Iraq, which now has one of the highest rates of execution in the world, the human rights group Amnesty International says in a report being released Tuesday. 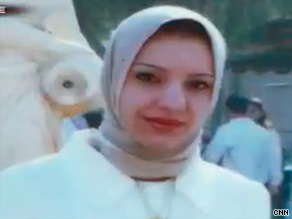 Samar Saed Abdullah is one of many facing execution in Iraq. She's accused of being an accessory to murders.

The courts that sentence people to death do not meet international standards, the report charged, and Iraqi authorities "provide very little information on executions, and some have been carried out secretly."

It criticizes the Central Criminal Court of Iraq and the Supreme Iraqi Criminal Tribunal, which issue the majority of death sentences in the country.

"Defendants commonly complain that 'confessions' were extracted from them under torture," the report alleges.

"Defendants also complain that they are not able to choose their own defense lawyers" when they appear before the Central Criminal Court of Iraq.

But Iraqi Justice Minister Dara Noor al-Deen Bahaa al-Deen, who said he says he is in favor of abolishing the death penalty, defended the Iraqi justice system, saying it is fair.

"As a judge, I assert that these measures take place with every crime that occurs. Of course, every defendant claims innocence and that the trial is unfair, but I am certain and reassured that -- especially now -- that any defendant, no matter what the sentence is, receives a fair trial and is given enough time for his testimony, that of the witnesses," al-Deen said. "Afterward, the court makes its ruling. If it finds that the evidence is sufficient that he/she committed the crime, it hands down the sentence he/she deserves."

Trials at the Supreme Iraqi Criminal Tribunal, which tries former Saddam Hussein-era officials charged with crimes against humanity and other major offenses, "have been marred by political interference," Amnesty charges. The group says the trial of Hussein himself was subject to such interference, with the government dismissing a judge considered unlikely to support the death sentence against him.

The former Iraqi leader was hanged in December 2006.

The report says that Iraqi President Jalal Talabani opposes the death penalty but has refused to block executions. And it quotes Prime Minister Nuri al-Maliki as "repeatedly" defending the death penalty.

Amnesty International opposes it "in all cases without exception," the group says in its report.

The report lists a wide variety of crimes that can result in the death penalty, including murder, crimes compromising state security, attempting to overthrow the government by violent means and damaging public property.

When asked by CNN about pleas not to execute women on death row, many of them mothers, al-Deen said, "For us, there is no difference between men and women who commit crimes. A person who commits a crime should be punished. In general, this can't happen now or in a year or two, but I hope in the future, the death penalty would be abolished, because I am personally in favor of life sentences rather than the death penalty."

Al-Deen said a request by him to waive the death penalty would have no effect.

"Even if I put in a request, this is a worthless request, because there is a law. As for abolishing the death sentence and replacing it with life imprisonment, that is an amendment of the law, and that has to happen through parliament. And parliament as the representative of the people decides if the punishment changes or doesn't," he said.

Responding to a reference to "hasty rulings," he said, "I don't think the judiciary rushes to make a ruling, especially a death penalty for a convict. There are many severe sentences that were handed down, and when they reached the appeals court, they were returned back and changed."

Amnesty International provided CNN with a copy of the report ahead of its publication. The report appears to be based on media reports and information from the Iraqi Interior Ministry and Ministry of Human Rights.

CNN's Jomana Karadsheh and Arwa Damon contributed to this report.