(CNN) -- Saudi Arabia's Interior Ministry has identified the suicide bomber who attempted to assassinate the country's assistant interior minister last Thursday and released details of a phone conversation between the two men prior to the attack. 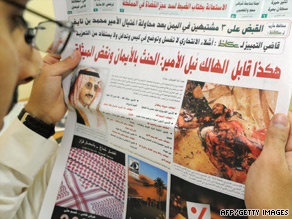 A Saudi man reads a newspaper featuring a front-page story on Thursday's attack.

The disclosures reported by the country's official news agency were highly unusual.

The agency, SPA, reported the attacker, Abdullah Hassan Talea' Asiri, a wanted Saudi militant who had been hiding in Yemen, got in touch with Saudi authorities telling them he wanted to turn himself in to Saudi Prince Mohammed bin Naif, the assistant minister of Interior for Security Affairs.

After arriving back in Saudi Arabia, Asiri spoke by phone to Mohammed, who agreed to see him during a Ramadan reception at his home in the city of Jeddah.

According to a transcript provided by SPA, during the phone call the men exchanged greetings and discussed the importance of the holy month of Ramadan.

Mohammed is quoted as telling Asiri that "one should be careful; evil people would like to exploit all of you. Now only you to fear Allah Almighty and come home." Later in the conversation, Asiri asked if a special plane could be dispatched to take him to meet with Mohammed.

Asiri, escorted by security, was transported to Jeddah, where he met with the prince at his palace. During the meeting, Asiri explained to Mohammed that other Saudi militants in Yemen also wished to surrender but sought reassurances from the prince.

According to SPA, a call was then placed to one of the militants in Yemen. While the prince was on the phone, Asiri blew himself up, SPA reported.

Mohammed, who is also the son of the country's Interior Minister, was lightly injured in the attack.

Saudi King Abdullah was shown visiting the prince in the hospital after the attack on Saudi TV. The king asked the prince why the militant was allowed to get so close him without being inspected properly and searched thoroughly. Prince Mohammed answered the king by telling him it had been a mistake.

SPA adds that "the concerned security authorities opened an investigation into the incident. However, the criminal laboratory and a forensic report have reached conclusions that, for security considerations, will not be announced at this time."

Asiri's name was on a list of 85 most wanted suspects released by Saudi Arabia in February. At the time the list was released, Saudi Arabia asked Interpol for its help in apprehending dozens of the wanted Saudis on the list who were suspected of plotting attacks against Saudi Arabia from abroad. The announcement was significant because it is rare for the kingdom to announce that some of its most wanted terrorists are on the loose. It is also unusual for Saudi Arabia to ask for help in finding them.

Some of the suspects on the most wanted list had been released from Guantanamo Bay, returned to Saudi Arabia, and had then gone through a Jihadi reeducation program run by the Interior Ministry, before fleeing to Yemen and taking up terrorist activity once more.

Saudi Arabia has been battling terrorism since 2003, when al Qaeda launched a series of attacks inside the Kingdom. In the security crackdown that followed, Asiri, like many other wanted Saudi militants, fled to Yemen.

Al Qaeda in the Arabian Peninsula, which operates out of Yemen, claimed responsibility earlier this week for the attack against Mohammed. In August, Saudi Arabia's Interior Ministry announced that over the past year, 44 al Qaeda suspects across the country had been arrested.

While the Interior Ministry is calling the attempted assassination an "action of treachery and treason", SPA reports that the Ministry will not change its "open-door policy" of granting amnesty to militants wishing to surrender - in particular, "those citizens residing outside the country" who wish to "take advantage of the state-sponsored program of advice and care."

All About Saudi Arabia • Yemen