(CNN) -- Iran and Venezuela plan to stand up against "imperialist" foes by strengthening bilateral cooperation on a range of issues, including nuclear power, Iranian President Mahmoud Ahmadinejad said Saturday. 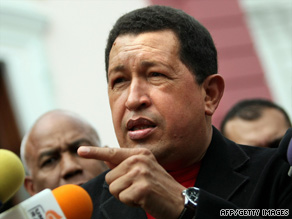 Chavez: "Tehran and Caracas should help revolutionary nations through further expansion and consolidation of their ties."

"Expansion of Tehran-Caracas relations is necessary given their common interests, friends and foes," Ahmadinejad said after a meeting with his Venezuelan counterpart President Hugo Chavez, according to Iran's semiofficial FARS news agency.

Chavez was in Tehran on Saturday with a team of high-ranking officials for a two-day visit.

Chavez highlighted bilateral projects already under way, including the construction of ethanol plants in Venezuela, and gas exploration in Iran by Venezuela's state-run oil company.

The Venezuelan president said he aims to build a "nuclear village" with Iranian help in his country, according to Iran's Press TV. The details of such a plan were unknown.

The visit was Chavez's eighth to Iran, and the first since Ahmadinejad's disputed re-election.

Chavez's trip to Iran follows visits to Libya, Algeria and Syria. He will visit Belarus and Russia before returning to Venezuela.