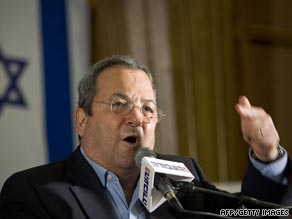 The move comes as Israel and the United States have been increasingly at odds over the settlement issue.

U.S. President Barack Obama has insisted Israel freeze all settlement activity as a necessary step toward advancing negotiations with Palestinians.

"Israel's decision to approve the construction of over 450 new settlement units nullifies any effect that a settlement freeze, when and if announced, will have," he said. "It further undermines faith in the peace process, and the belief that Israel is a credible partner for peace."

"Israel's decision destroys the chances for peace and frustrates the efforts of the U.S. plan," Saidam said.

"Israel's rush to build more homes aims at controlling more land and creating new facts on the ground, and this does not support the possibility of building a state."

Earlier this year, Secretary of State Hillary Clinton said she and Obama had told the Israelis that the United States opposed all expansion of Israeli settlements.

"He [Obama] wants to see a stop to settlements -- not some settlements, not outposts, not natural growth exceptions. We think it is in the best interests of the effort that we are engaged in that settlement expansion cease," Clinton said at the State Department in May.

But in late August, a State Department spokesman held out the possibility that Israelis and Palestinians might eventually take a different path.

"The position that the secretary has stated remains our position," spokesman P.J. Crowley said in a briefing on August 27. "And we continue to discuss with Israel and with the other parties what they have to do on the settlement issue."

But the spokesman said the ultimate goal is a return to direct talks between the Israelis and Palestinians.

"We have to find our way back to negotiations. We have to have confidence that when those negotiations start that all of the parties -- the Palestinians, the Israelis, the rest of the region -- are invested in this peace process," he said.

All About Israel • Palestine