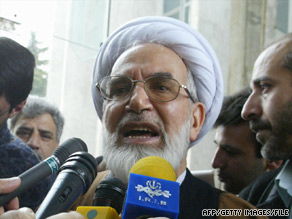 Brandishing a court order, representatives of the prosecutor entered the building in the Tehran neighborhood of Jamshidieh at 3 p.m., a spokesman for Karrubi's party said, according to the Iranian Labor News Agency.

The spokesman, Ismail Gerami Moghaddam of the Etemadeh Melli (National Trust) Party, said the office was searched and documents, CDs, computers and videos were taken.

Visitors who approached the office to see Karrubi were told that the office was closed, Moghaddam said.

He added that the editor of the party's Web site was arrested in Tehran.

The incident occurred in offices where a committee organized by Moussavi would meet to review the cases of detainees, Norooz News reported.

Families of detainees would also come to the offices to share their grievances with Moussavi's committee, headed by one of his advisers, Ali Beheshti, Norooz said.

The officials refused to give the committee a list of the items confiscated during the raid and said none of it would be returned, Norooz reported.

No other details were immediately available, and there was no comment from government officials.

Moussavi and Karrubi challenged hardline President Mahmoud Ahmadinejad in the June 12 election, in which the president was declared the overwhelming winner.

Ahmadinejad's re-election prompted hundreds of thousands of protesters to take to the streets, and more than 1,000 people were arrested in the subsequent government crackdown.

Hundreds remain behind bars, and opposition leaders have accused the government of allowing detainees to be tortured, raped and sometimes killed in Tehran prisons.