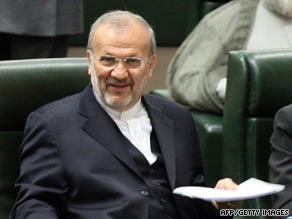 The proposals on "global issues" include suggestions on its nuclear program, according to the Iranian Student News Agency. Iranian Foreign Minister Manouchehr Mottaki submitted the proposals to ambassadors from China, France, Germany, Russia, Switzerland -- which represents U.S. interests in Tehran -- and the British charge d'affaires in Tehran, Press TV reported.

The United States has accused Tehran of concealing a nuclear weapons program. The Islamic republic insists its program is strictly for civilian power, but a U.N. report earlier this year found that the Iranian nuclear program had "military dimensions."

The agency's chief, Mohamed ElBaradei, said Monday that Iran has reached a "stalemate" with the United Nations' nuclear watchdog agency over its disputed nuclear program.

Iran has "cooperated" with the International Atomic Energy Agency by improving its safeguard measures at its fuel-enrichment plant and allowing access to its still-unfinished research reactor in Arak, ElBaradei told the agency's 35-member Board of Governors.

"On all other issues, however, relevant toIran's nuclear program, there is a stalemate," ElBaradei added.

"Iran has not suspended its enrichment-related activities or its work on heavy-water related projects as required by the (U.N.) Security Council," he said.

Iran has also not implemented additional protocols, which authorized IAEA to visit Iran's nuclear facilities whenever they wanted, ElBaradei said.

"Likewise, Iran has not cooperated with the agency in connection with the remaining issues detailed fully and completely in the agency's reports which need to be clarified in order to exclude the possibility of there being military dimensions to Iran's nuclear program," the IAEA chief said.

Representatives of the five permanent members of the U.N. Security Council discussed the issue during a private meeting near Frankfurt, Germany, last week. Representatives from Germany and the European Union were also present.

The German negotiator said he expects Iran to re-enter talks on its nuclear program before the U.N. General Assembly reconvenes next week.

"We have urged Iran to give negotiations a chance," he said.

In an effort to persuade Iran to stop its enrichment program, Germany and the five permanent U.N. Security Council members presented Tehran with economic incentives in June 2008.

The State Department announced earlier this year that it has asked the European Union's international policy chief, Javier Solana, to invite Iran to new talks with the nations.

U.S. President Barack Obama -- who has promised diplomatic engagement with Tehran -- has said that the world will not "wait indefinitely" and allow Iran to build nuclear weapons. Germany has warned Iran that it has a limited time to return to international talks on its nuclear program before it faces stiffer sanctions.

The White House did not confirm or deny the report in a statement that said, "There have been multiple ways that communication has taken place with Iran. We do not discuss the details or modalities of those communications."

If true, it would be the second such letter from Obama to Ayatollah Ali Khamenei this year. CNN, citing Iranian sources, reported in June that Obama had sent a direct message to Khamenei weeks before the disputed June 12 election.

Tabnak reported Tuesday that the Islamic leader had responded to the first letter.