BAGHDAD, Iraq (CNN) -- The Iraqi journalist who threw his shoes at then-President George W. Bush at a news conference in December could be released from jail as early as next week, his attorney told CNN on Friday. 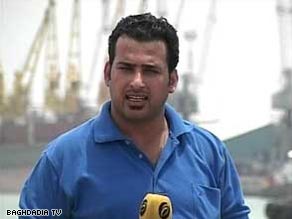 TV reporter Muntadher al-Zaidi, shown in a file photo, was jailed after throwing his shoes at President Bush.

Muntadhar al-Zaidi is serving one year in prison after his original three-year sentence was reduced by an appellate court in April.

Dhiyaa al-Saadi, head of Iraq's Bar Association and al-Zaidi's chief defense attorney, said he had submitted a petition about two months ago to authorities requesting the release, but no decision has been announced yet. Under Iraqi law, a "conditional discharge" allows for the release of a prisoner after he serves three-quarters of his sentence and is based on good behavior during detention.

Al-Zaidi has been in jail since the December 14 news conference at which he threw both his shoes at Bush and called him a "dog" -- two of the worst insults in the Middle East. Bush ducked the shoes and was not hurt in the incident.

Al-Saadi was optimistic about his client's release happening as early as Monday.

On Thursday, al-Zaidi's family was preparing for his possible release; his two brothers Udey and Dhirgham along with their children plastered the walls of their modest Baghdad home with his posters.

"We are happy, like any detainee's family would be happy for the release of its son after the bitter time he spent in jail ... " said Dhirgham al-Zaidi, who expected his brother to be released sometime next week.

He said the family has received many phone calls from supporters across the country who plan to travel to Baghdad and welcome al-Zaidi after his release.

Al-Zaidi was sentenced to jail for "assaulting a foreign head of state on an official visit to Iraq," a crime under Iraqi law.

While many Iraqis do not hold Bush in high esteem, opinions were mixed in Iraq following the incident. Some viewed al-Zaidi as a national hero, with thousands taking to the streets calling for his release; others said his act was against Arab traditions of honoring guests.

Al-Zaidi's brothers said they have been offered many gifts and financial rewards, though they say they have rejected them.

Dhirgham al-Zaidi, who met with his brother in jail last week, said his brother will use whatever he gets to help those in need.

"He told me, 'I will dedicate the rest of my life to the weak ones in Iraq, the orphans and widows,' " Dhirgham al-Zaidi said.

During his March court appearance, al-Zaidi explained his actions in an hourlong appearance at the Central Criminal Court of Iraq. He said he was spurred on by the "violations that are committed against the Iraqi people."

"I could only see Bush and feel the blood of the innocents flow under his feet, as he was smiling that smile -- as if he had come to bid farewell to Iraq and with the last support and more than one million martyrs," al-Zaidi said. "At that moment, I felt this is the man who killed our nation ... the main murderer and the main person responsible for killing our nation."

The reporter told the judge that he had intended to embarrass the U.S. president.

CNN's Jomana Karadsheh in Baghdad contributed to this report.

All About George W. Bush • Iraq