JERUSALEM (CNN) -- Posters featuring lost youth are not an unusual site in any big city, but the ones that recently appeared on Israeli TV and on the Internet weren't what they seemed. 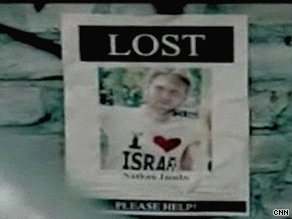 The poster campaign by Israeli group MASA was pulled after three days.

They were part of an advertising campaign this month by an Israeli group that pays to bring young Jews from around the world to Israel for extended visits in the hope of bolstering their Jewish identity.

The campaign by MASA, an organization funded by public and private funds, showed Jews living outside of Israel -- known as the diaspora -- as "lost" because they had married non-Jews.

The effort offended many Jews who had entered into mixed-faith marriages and didn't consider themselves "lost."

"It's a kind of blanket nullification of the diaspora and the diaspora Jewry," said Ben Hartman of Israel's Ha'aretz newspaper. "I don't know if that was the intention but it just shows just how fast and loose ... Israelis can ... play with imagery."

Watch more about the ad campaign »

The foreboding ads featured dark images with solemn music, showing posters of "lost" Jews who married outside their faith.

The head of education at the Jewish Agency, a co-sponsor of MASA, said the intentions were good even if the end product wasn't.

"There is a great fear and a concern in world Jewry about the future of the Jewish people and there is a strong belief that an intensive year spent together with young Jews, and in Israel, will help strengthen the identity of young Jews," said Alan Hoffman, who leads the group's education wing.

The backlash created by the campaign ultimately resulted in it being pulled after three days.

"The PR campaign should bring the Jews of the diaspora closer and not alienate them," said Natan Sharansky, head of the Jewish Agency.

Critics say this campaign ultimately exposed what is sometimes seen as the disconnect between the Jews of Israel and their counterparts around the world: the assumption that Israeli Jewish authorities are the only ones to determine what is truly Jewish.