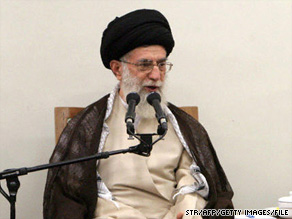 Ayatollah Ali Khamenei also called Western concerns about Iran's nuclear ambitions -- which Tehran says are only for energy purposes -- "purely a fabrication by the United States," according to the Islamic Republic News Agency.

"This is something that is in the doctrine of anti-Iranianism, since the policy and the 30-year-old history of the Islamic Republic has proven that Iran wants to live in peace and under the spirit of equality and fraternity, with its Muslim neighbors and the rest of the world," Ayatollah Ali Khamenei said.

On Thursday, President Obama said the United States is significantly overhauling Bush-era plans for a missile defense shield in Europe, based partly on the latest analysis of Iran's offensive capabilities.

Obama said the change of gears was based on an "updated intelligence assessment" about Iran's ability to hit Europe with missiles. The Islamic republic's "short- and medium-range" missiles pose the most current threat, he said, and "this new ballistic missile defense will best address" that threat.

Khamenei, speaking on the first day of Eid al-Fitr, a festive end to the Muslim holy month of Ramadan, countered by comparing Obama to his predecessor.

"America, under its former president, spared no efforts against the Muslim world as well as against Iran," Khamenei said. "Even the current administration -- with the apparently friendly words and messages -- follows that same anti-Islamic and anti-Iranian policy of the past."

The Bush-era proposal called for the United States to set up a radar site in the Czech Republic and 10 missile interceptors in Poland to counter the threat of Iran launching long-range missiles at America's allies in Europe. The new system will have "hundreds" of missile interceptors instead, a Pentagon official said last week.