Palestinians call for Israel to be 'punished' for Gaza offensive

(CNN) -- Palestinians on Tuesday urged the United Nations to "punish" Israel as a scathing U.N. report accused the nation of war crimes during its military offensive in Gaza last winter. 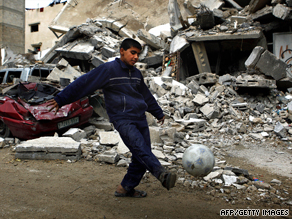 A Palestinian boy kicks a football outside damaged homes in northern Gaza in January 2009.

But Israel rejected the investigation as one-sided and shameful.

The report accused Israel of committing "actions amounting to war crimes, possibly crimes against humanity" during its military incursion into Gaza from December 27 to January 18.

Richard Goldstone, the South African judge who headed the U.N. investigation into the conflict, demanded that someone be held responsible for crimes committed during it.

"The lack of accountability for war crimes and possible crimes against humanity has reached a crisis point," Goldstone said Tuesday. "This is the time of action."

He formally presented the report to the U.N. Human Rights Council in Geneva, Switzerland on Tuesday.

It claims that the Israeli Defense Forces "failed to take feasible precautions required by international law to avoid or minimize loss of civilian life, injury to civilians and damage to civilian objects."

Ibrahim Khraishi, the Palestinian Authority's ambassador to the United Nations, called the report professional and unbiased.

"This report should not be another report to just document and archive," said Khraishi. "My people will not forgive this council if they let these criminals go unpunished."

But Israel's ambassador to the United Nations, Aharon Leshno-Yaar, questioned the report in strong language Tuesday, calling it one-sided and shameful.

"This report is based on carefully picked incidents, cherry-picked for political effect," Leshno-Yaar said. "The authors of this fact-finding report had little thought about finding facts."

Israel did not cooperate in the U.N. investigation, calling it flawed and biased.

There is an ongoing dispute about the number of people killed in the three-week military offensive which Israel called Operation Cast Lead.

The Gaza-based Palestinian Center for Human Rights put the death toll at 1,419 and said that 1,167 of those were "non-combatants."

The Israeli military released its own figures earlier this year, claiming 1,166 people were killed and that 60 percent of those were "terror operatives."

A separate report released earlier this month by Israeli human rights organization B'tselem put the death toll at 1,387, claiming that more than half of those killed were civilians.

Israel has said it "had both a right and an obligation to take military action against Hamas in Gaza to stop Hamas' almost incessant rocket and mortar attacks upon thousands of Israeli civilians and its other acts of terrorism."

Hamas is the militant Palestinian movement which governs Gaza. It rejects Israel's right to exist.

The U.N. report said Israel fired the chemical agent white phosphorus in civilian areas, intentionally fired upon hospitals using high-explosive artillery shells, and failed to provide effective warnings to civilians or U.N. workers before attacks, all of which can be war crimes.

The report recommends that the U.N. Security Council require the government of Israel to launch appropriate independent investigations into the findings of the report within three months. The findings also recommend that the alleged Israeli war crimes be explored by the International Criminal Court.

Israel has launched a number of its own investigations into the conflict.

The findings also call on Palestinian leadership to investigate alleged war crimes, for militants to respect humanitarian law, and for the release of the Israeli soldier Gilad Shalit, who was kidnapped by Palestinian militants in 2006, on humanitarian grounds.

Representatives from Russia, Cuba and Egypt applauded the Goldstone report.

The U.S. representative to the U.N. Human Rights Council, Assistant Secretary of State Michael Posner, said some of the recommendations in the report were "deeply flawed" and called for Israel and Palestinian authorities to be allowed to finish conducting their own investigations before passing judgment.

A spokeswoman for U.N. Secretary-General Ban Ki-moon has said the Human Rights Council could draft a resolution on the issue by Friday.

The group that prepared the report is called the U.N. Fact Finding Mission on the Gaza Conflict. Its 500-plus page report was released earlier this month and presented formally on Tuesday.

All About Israel • United Nations • Gaza