(CNN) -- The would-be assassin of Saudi Arabia's Prince Mohammed bin Nayef hid his bomb in his underwear, apparently believing that cultural taboos would prevent a search in that part of his body, according to a Saudi government official close to the investigation. 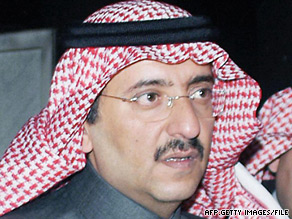 The prince was slightly injured when the bomb exploded in the August attack. Several news reports this week have said the assailant hid the bomb inside his rectum, but according to the Saudi official, the government assessment discounted those reports, based on various factors.

Among them: When the bomb went off there was a flash of light, suggesting that the bomb was not hidden inside the assassin's body. Also, doctors consulted by the government judged that the toxicity of the plastic explosives would make them hard to hold for many hours inside the rectum, and the environment in this area of the body would make detonation "difficult," according to the Saudi official close to the investigation.

The Saudis said they think the bomb weighed 100 grams and was made with a plastic explosive, to avoid detection by metal detectors through which the would-be assassin had to pass before he was allowed to meet with the prince.

The official said the explosive was PETN, which was used by the so-called shoe bomber Richard Reid, who attempted to blow up an American Airlines flight between Paris, France, and Miami, Florida, in December 2001.

The Saudis are exploring the possibility that the prince's assailant exploded the device using a detonator that used a chemical fuse, which would not be detected by a metal detector.

The would-be assassin -- a Saudi member of al Qaeda who had fled to Yemen, identified as Abdullah Hassan al Asiri -- posed as a member of the terror group willing to surrender personally to Prince Nayef.

Prince Nayef is responsible for overseeing the kingdom's terrorist rehabilitation program, and some two dozen important members of al Qaeda previously have surrendered to him in person, according to the Saudi government official.

During the month of Ramadan, traditionally a time of repentance in the Muslim world, al Asiri gained an audience with the prince at his private residence in Jeddah, presenting himself as someone who could also persuade other militants to surrender.

Under the cover of pretending that he was reaching out to other militants to surrender, al Asiri briefly called other members of al Qaeda to tell them that he was standing by Prince Nayef. After finishing the call, the bomb blew up, killing al Asiri but only slightly injuring the prince, who was a few feet away from his would-be assassin.

The Saudi government official characterized the prince's narrow escape as a "miracle."