(CNN) -- The United States will withdraw another 4,000 troops in Iraq by the end of October, the U.S. military commander in Iraq said in prepared testimony for a congressional hearing Wednesday. 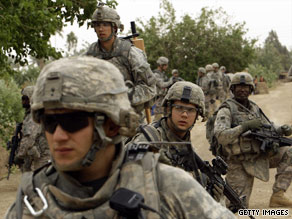 The top military commander in Iraq says the U.S. is on track to end its combat mission in Iraq by next year.

U.S. Gen. Ray Odierno is expected to tell the House of Representatives Armed Services Committee that there has been a significant drop in violence in Iraq recently, according to the statement obtained by CNN.

President Obama has said the U.S. combat mission in Iraq will end by August 31, 2010. Obama also said he plans to keep a range of 35,000 to 50,000 support troops on the ground in Iraq after combat troops are out.

"We have approximately 124,000 troops and 11 Combat Teams operating in Iraq today. By the end of October, I believe we will be down to 120,000 troops in Iraq," Odierno said in the remarks.

"Although security is improving, it is not yet enduring. There still remain underlying, unresolved sources of potential conflict," Odierno said.

Odierno pointed to the August 19 bombings in Baghdad that targeted the Ministries of Finance and Foreign Affairs that killed more than 100 people as an example of ongoing challenges in Iraq.

However, Odierno gave a vote of confidence to the Iraqi forces who had taken over security for Baghdad after U.S. forces handed over control.

"The Iraqis wanted to be in charge; they wanted the responsibilities; and they have demonstrated that they are capable," he said.