TEHRAN, Iran (CNN) -- Three Iranians have been tentatively sentenced to death in connection with post-election protest activities, according to semi-official state media. 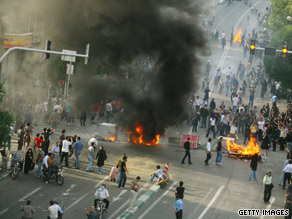 Supporters of Iran's opposition set flaming barricades in the street during a protest in June.

The three -- who were identified only by initials -- were accused of contacts with opposition groups, the semi-official ISNA news agency reported Saturday.

The death sentences can be appealed, ISNA reported, quoting Bashiri Rad, director of public relations of the Tehran judiciary.

No other information was released about the three defendants or the charges they faced.

Dozens of protesters have been tried in the months since. Opposition presidential candidates Mehdi Karrubi and Mir Hossein Moussavi have alleged that those convicted were tortured into confessing, and that some defendants were raped in prison.

Reformist former President Mohammad Khatami condemned "the atrocities committed at certain detention centers, as well as those committed during arrests, which, in some cases, resulted in murder," according to a statement issued by his office in August.

The Iranian government initially denied such accusations. But state media reported in August that authorities had fired and arrested the chief of an Iranian jail that was closed amid allegations of mistreatment of detainees.