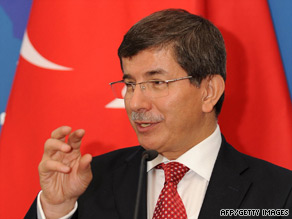 Foreign Minister Ahmet Davutoglu says, "We hope that the situation in Gaza will be improved."

The Turkish government decided to change the list of participating countries and exclude Israel, according to the Israel Defense Forces. As a result, the NATO exercise was effectively scrapped, although a U.S. embassy representative said it was only postponed.

Asked why Turkey excluded Israel from the exercise, Foreign Minister Ahmet Davutoglu said, "We hope that the situation in Gaza will be improved, that the situation will be back to the diplomatic track. And that will create a new atmosphere in Turkish-Israeli relations as well. But in the existing situation, of course, we are criticizing this approach, [the] Israeli approach."

Earlier, the Turkish foreign ministry said "a technical matter," not politics, prompted the delay of the Anatolian Eagle exercise.

Instead of the NATO exercise, Davutoglu said Turkey would be conducting "a national military exercise now after consultations with all the parties involved."

The United States and Italy -- which, along with Turkey, are members of NATO -- were scheduled to take part in the exercise. Both countries withdrew their participation from the drill after learning Israel had been excluded, according to the Israeli newspaper Haaretz, citing foreign ministry sources.

A spokeswoman for the U.S. Embassy in Ankara would say only that the United States and its allies postponed the exercise "in hopes of re-scheduling it."

"We look at this as a postponement, not a cancellation," said embassy spokeswoman Deborah Guido.

Turkey is Israel's Muslim ally in the Middle East, and the two nations have enjoyed close military and economic relations over the last decade. But tensions have emerged over strong Turkish criticism of the Gaza offensive in December and January.

The Anatolian Eagle exercise is held every few years to boost international aerial cooperation. It was to run from October 12-23.

All About Turkey • NATO • Israel