(CNN) -- Salwa Salah was 16 years old when she was arrested by Israeli forces and jailed for seven months. 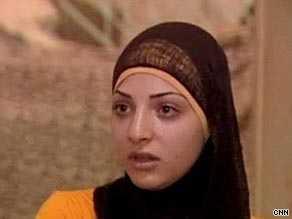 To this day she says she does not know her crime and is struggling to get her life back on track.

She was released shortly before her final school exams but was unable to catch up and now has to re-sit before she can go to university.

Salah was held under administrative detention - detention without charge or trial. It is legal under international law which permits its use only in exceptional cases to protect the security of a state.

A report released Wednesday by human rights groups B'Tselem and HaMoked has called on Israel to release the detainees or charge them. They say there are currently 335 Palestinians being held under administrative detention, three of them women, one a minor.

When asked about Salah's case, Israeli prosecutors gave CNN the court minutes which read, "It has been shown that the prisoner was involved in planning military operations very close to the time that she was detained."

Watch more about the story »

Salah insists she is a schoolgirl and not a terrorist but no further information was given to her lawyer. Much of the evidence in these cases remains secret.

Sahar Francis, a lawyer from Ademeer human rights association said: "It is submitted to the military judge and me as a lawyer. I don't have access to this file so actually I can't defend my clients properly since I don't know what the exact suspicion against my client is."

Talking to CNN about her incarceration, Salah said the prison conditions were fit only for animals and she found her time inside psychologically hard. "The prisoner does not know if he or she is going to be released or not," she said.

"So sitting in a prison confused and weary asking 'am I going to be released?' You are distorted by this one question."

Israel says administrative detention is a valuable pre-emptive tool in its ongoing war on terrorism and often evidence cannot be made public. Lt. Col Maurice Hirsch, Israeli prosecutor, said: "Most of the evidence is not shown to the detainee but rather is kept a secret in order to protect the lives of the people that provide the information and the technological means by which the information is acquired."

The al-Hidmi family has found itself on the wrong side of administrative detention for many years.

One son Islam, 20, was held for twenty one months without charge or trial.

Two months ago there was an emotional homecoming for Islam, his mother had not seen him since his arrest.

Two weeks ago, Islam was arrested again, again without charge.

His mother, Fawzia al-Hidmi says of her 18 year old son, "I want my son here so he can do his exams and I can be proud like everyone else who celebrated their children's graduation."

Both sons had previously been charged with throwing stones at Israeli troops and affiliation with Islamic Jihad.

"The default should always be towards trial and punishment," said Mark Ellis of the International Bar Association.

"These types of administrative detention can never be a substitute for punishment and trials. Based on the numbers of individuals detained, the Israeli military appears to be using it as the default and that is what makes it in my opinion illegal under international standards."