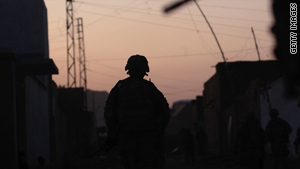 Kabul, Afghanistan (CNN) -- Fourteen Americans died in two separate helicopter crashes in Afghanistan on Monday, NATO's International Security Assistance Force said -- 10 in one incident and four in the other.

It was the largest number of Americans killed in Afghanistan in a single day in at least four years, according to CNN records.

ISAF ruled out enemy fire in the crash that killed four Americans, and said enemy action was not thought to be the cause of the other.

In the deadlier crash, a helicopter went down in the country's west.

Three U.S. Embassy members were among the fatalities in that crash, according to the embassy in Kabul.

"The incident is currently being investigated, but it is confirmed that hostile fire was not involved," ISAF said in an earlier news release.

"Each and every death is a tremendous loss for the family and friends of each service member and civilian. Our grief is compounded when we have such a significant loss on one day," Col. Wayne Shanks, an ISAF spokesman, said in a statement.

ISAF did not announce the names of the dead or which branch of the service they were in, and did not immediately respond to a CNN request for the information.

Separately, ISAF said a joint international security force killed more than a dozen enemy fighters while searching a compound. The site was thought to harbor insurgents tied to narcotics trafficking in western Afghanistan.

The militants were killed in a firefight when insurgents confronted the joint force.

It was a helicopter returning from that firefight that crashed, killing 10 troops. As the force was leaving, a helicopter "went down due to unconfirmed reasons," ISAF said. A recovery operation was launched.