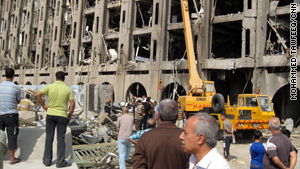 New York (CNN) -- The bombs that ripped through Baghdad on Sunday immediately brought more bloodshed -- and bode only of the promise of more to come.

The attacks have been claimed by the Islamic State of Iraq -- a group affiliated with al Qaeda in Iraq -- and there's nothing to suggest the attacks will come to an end.

It's part of a long-running campaign to destabilize the U.S. mission, the Iraqi government and to reignite sectarian civil war.

The slaughter is not new but the extent of the killings in these bombings -- 160 dead and more than 500 injured -- do punctuate a seemingly never ending campaign.

While al Qaeda in Iraq has been gutted from within, principally by Sunni insurgents turning on them and assassinating them over recent years, the network still exists.

Al Qaeda, an organization built with the expectation of loss, has endured and will continue to do so until Iraq's slated January election and beyond.

Under the international agreement between Washington, D.C. and Baghdad signed by the then-outgoing Bush administration, America's war in Iraq has all but ended with command of the war shifting permanently to the Iraqi government.

While many are thwarted, while car bombs are found and defused, it's an ugly matter of fact that in war some bombs will always get through.

And Iraqi security forces in no way can be said to be ready to face the threat posed by al Qaeda or any insurgent group.

The devastation of the bombings has had the effect al Qaeda desired -- chipping away at Iraqi public confidence in government, even prompting the governor of Baghdad to call for the resignation of the security officials in charge of the capital's safety.

Al Qaeda in Iraq is not the network it once was, it's not able to deliver multiple suicide bombings on an almost daily basis.

When I was last in Baghdad nationalist insurgents told me there were but a handful of operational al Qaeda cells in the city. Nonetheless, they warned five committed al Qaeda members can "wreak havoc."

The weekend bombings are testament to that. While the tempo of al Qaeda's suicidal strikes -- largely targeting Iraq's Shia community -- have slowed, they have not stopped. While al Qaeda in Iraq maintains its capacity to kill it will keep striking.

This is the environment that the U.S. is likely to leave in Iraq -- a fragile state plagued with an ever present al Qaeda threat.

The question is how that state counters the threat and maintains its credibility with its own people. And that, ultimately, will be the final measure of the American mission -- how well the Iraqis stand up.