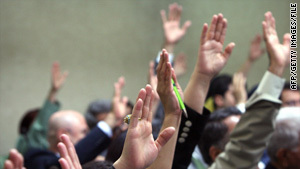 A show of hands takes place during the first session of the Kurdish parliament in Arbil on September 08.
STORY HIGHLIGHTS
RELATED TOPICS

Baghdad, Iraq (CNN) -- The Kurdish bloc in the Iraqi parliament intends to boycott the vote on a proposed election law if the oil-rich province of Kirkuk is banned from voting in next year's national elections, two Kurdish lawmakers said.

A vote may be held Thursday on a proposal that would govern the elections, now set for January 16, legislators Mahmoud Othman and Abdul Bari al-Zebari said on Wednesday.

Kurds displaced under Saddam Hussein's rule settled on land they say is rightfully theirs. However, Arab and Turkmen residents claim many more Kurds have moved into Kirkuk than were displaced, and that allowing them to vote would create an unfair advantage.

Without the Kurdish lawmakers there will be no quorum, thereby blocking the vote, Sunni lawmaker Salim al-Jabouri, a member of the small Sunni political bloc, the Iraqi Front for National Dialogue, told CNN.

Before conducting balloting next year, Iraq needs an election law that lays out basic rules. If one is not adopted, the government may have to either reschedule the election or rely on the law used in the 2005 national elections, officials say.

Lawmakers failed to reach agreement on the issue a week ago.

The constitutional deadline for the elections is January 31. The election commission needs at least 90 days after passage of the law to carry out elections, which U.S. and Iraqi government officials call a vital step in Iraqi efforts to solidify a democratic system in the post-Saddam Hussein era.