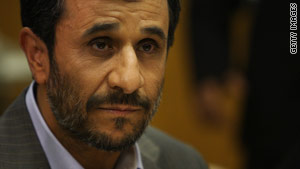 Iranian President Mahmoud Ahmadinejad at a U.N. meeting in New York on September 25, 2009

Tehran, Iran (CNN) -- Iran has sent an "initial response" to a proposal designed to break the deadlock over its nuclear program, the International Atomic Energy Agency said Thursday.

The IAEA did not say what Iran's response was.

The deal could reduce the amount of material Iran has to make a nuclear bomb. The United States and its allies fear Tehran's goal is to make a bomb. Iran denies it.

Under the proposal, Iran would send low-enriched uranium abroad to be turned into material for use in medical research and treatment at a reactor in Tehran.

Ahmadinejad, speaking to crowds in the northeastern city of Mashhad, said the West has gone from "confrontation to cooperation," according to state-run Press TV, and praised the IAEA as "playing a genuine role."

"One, they told us to stop (nuclear work,)" he said. "Now they express readiness to cooperate with us in exchange of fuel, expansion of the technology and construction of power plants and atomic reactors."

He said his nation is ready to talk with the United States and its allies in developing Iran's nuclear program, and he described a current draft proposal as a "victory" for Iran.

A formal response to the proposal is expected from Tehran on Friday. If accepted, it could help quell the international showdown over Iran's nuclear activities.

That deal, brokered earlier this month at IAEA headquarters in Vienna, Austria, would send low-enriched uranium abroad for further enrichment and then return it to Iran for use in medical research and treatment at a reactor in Tehran. And, Ahmadinejad said, getting fuel for the Tehran reactor would provide an opportunity to determine the "honesty" of the IAEA and the countries involved in the negotiations.

"We welcome the exchange of fuel, technical cooperation and construction of power plants and reactors and we are prepared to cooperate (in those areas)," he said.

Iran shocked the world in September by revealing the existence of a previously unknown nuclear plant near the city of Qom.

The IAEA, the U.N. nuclear watchdog, sent a team of inspectors for a four-day visit to that facility, Press TV said. It said the inspectors "have expressed satisfaction with their mission."

Iranian officials are expected to meet with the five permanent members of theU.N. Security Council -- Britain, China, France, Russia and the United States -- plus Germany, to further discuss the nuclear program.

Ahmadinejad also said that Iran expected countries who are parties to the talks to "fulfill their previous obligations."

"Current international circumstances suggest that the atmosphere of distrust in the ongoing nuclear talks is diminishing," said Ebrahimi, a member of the Majlis National Security and Foreign Policy Committee.

He said the IAEA-brokered proposal would be beneficial "because Iran's right to produce enriched uranium would be recognized."

"If we choose this option, we can continue enrichment and gradually increase our ability to produce uranium that is more enriched to supply our power plants and reactors in the future," Ebrahimi added.