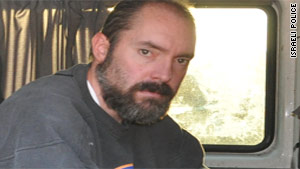 Jerusalem (CNN) -- An American-born Israeli man, described by police as a "Jewish terrorist," is mentally unstable and in need of psychiatric help, his attorney told CNN Monday.

Israeli police and security forces say he has been charged in connection with a string of attacks and murder plots over the past 12 years against Arabs, homosexuals, leftists, messianic Jews and police forces.

Teitel's attorney Adi Keidar said his client has admitted to the 1997 shooting of a Palestinian man and laying explosive devices -- in addition to other crimes that he was not involved in, particularly the August shooting attack on a Tel Aviv gay youth club that killed two people.

Police said that Teitel initially claimed responsibility for the attack, but they are still unsure about the identity of the shooter.

Keidar said he has yet to see the full indictment against his client.

Teitel sees himself as an emissary of God, who has come to eradicate all the profanities against God, according to Keidar. He said he believes Teitel is in need of immediate psychiatric evaluation.

Teitel, 37, was arrested last month in Jerusalem after hanging posters in support of the Tel Aviv attack.

"He was like a serial killer. This guy was a Jewish terrorist who targeted different types of people," police spokesman Micky Rosenfeld said. "He was deeply involved in terrorism on all different levels".

According to police, the long series of attacks began in 1997, when Teitel entered Israel as a tourist and managed to smuggle a handgun on board a British Airways flight to Tel Aviv.

Teitel's first victim, police said, was Samir Balbisi, an east Jerusalem cab driver who was shot and killed. Two months later, the same gun was used to shoot and kill a Palestinian shepherd in the South Hebron Hills. Teitel was interrogated by police following the second killing but denied any involvement in the act and was later released.

Teitel moved to Israel in 2000, into the West Bank settlement of Shvut Rachel, married and has four young children. According to Shin Bet, Israel's security agency, Teitel's father, who now lives in Israel as well, served as a dentist in the U.S. Marines during the Vietnam War. It is believed Teitel was first introduced to weapons and explosives during his time living on American military bases.

In 2008 Teitel allegedly planted a bomb inside a package delivered to a house of a messianic Jewish family. Ami Ortiz, a 15 year old boy suffered serious injuries in the attack, police said. Next on Teitel's list of targets, police said, was Israel Prize laureate Zeev Sternhell. Teitel admitted in planting explosives at Sternhell's doorstep in September last year. Sternhell, a prominent left-wing activist was lightly wounded, according to police.

Harsh questions were raised in the Israeli press Monday on how an alleged killer was able to escape the hands of the law for over 12 years and emphasized the difficulty of security forces in tracking Israeli terrorists.

Shin Bet described Teitel as a lone wolf who did not confess his acts to anyone and carefully calculated his moves in order not to get caught. He did not learn the Hebrew language in all his years in Israel, they said.

CNN's Michal Zippori and Guy Azriel contributed to this report.