Report: Iran will not ship uranium out of the country 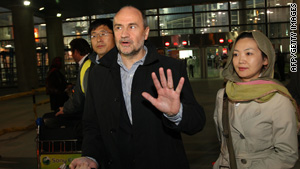 Tehran, Iran (CNN) -- A senior Iranian politician said Saturday the country would not ship low-enriched uranium out of the country, which is a major part of a pending nuclear deal between Iran and international powers, according to semiofficial state media.

This issue is part of a deal being negotiated by a U.N. nuclear watchdog agency. The draft agreement has been supported by the United States, France and Russia.

It calls for Iran to ship low-enriched uranium outside the country, possibly to Russia, to be converted into fuel rods.

The material then would be shipped back to the Tehran research reactor that produces isotopes for use in medical treatments.

The U.N.'s International Atomic Energy Agency said under the deal, Iran would get the converted fuel back by the end of 2010.

But Boroujerdi, an influential member of the parliament, said he does not see the uranium shipment happening.

""Iran is not to give any of its 1,200 kilograms fuel to the other party to receive 20 percent (enriched) fuel and whether gradually or at once, this will not be done and is called off," he told ISNA.