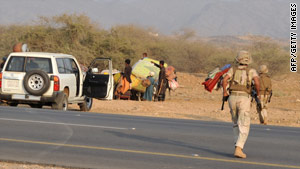 (CNN) -- Saudi Arabia said Sunday that it has regained control of a mountainous region from Yemeni rebels who it said entered the kingdom's borders.

"Our directive ... was to fix and take control of the situation only within our borders and not to interfere inside Yemen's borders."

On Friday, the government said it had carried out airstrikes earlier in the week against the rebels.

The airstrikes came after an armed group, possibly Houthi rebels, infiltrated Saudi territory from Yemen on Tuesday and fired on border guards. The clashes killed three members of the Saudi security forces and wounded 15, Khalid said.

A military source said the rebels lied "in apparent attempts to bring the two countries into conflict," Saba reported Thursday.

"The Houthi insurgents continue to disseminate false information to deflect media attention from their collapsing morals and foothold. Yemen respects the sovereignty of the Kingdom of Saudi Arabia and their right to defend and secure their territories against any perpetrator," the Yemeni Embassy in Washington said in a statement last week.

Khalid said the incident will not affect the relationship between the two countries.

"This will enhance our already strong relationship with Yemen," he told the television station, Al-Ekhabriya. "There's been no deterioration at all to the Saudi-Yemeni relationship as far as Saudi Arabia is concerned."

The conflict is considered to be both separatist -- over who will assert authority in the area -- and sectarian -- whether Shiite Islam will dominate in majority Sunni Yemen.

The rebels are named after a slain Shiite cleric, Hussein al-Houthi.