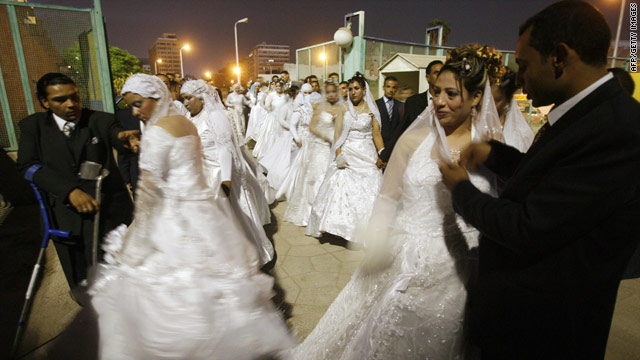 London, England (CNN) -- A growing number of Egyptian women are demanding a divorce and seeking counsel for their marriages, as the social stigma against it weakens and talking about relationship problems becomes more popular in the media.

Once considered taboo to discuss in public, private relationships between men and women are now the hot topic of television talk shows, radio programs and blogs. Mahasen Saber, host of Divorce Radio, says that her program is helping to break the stigma.

"People are shocked at first, but after they read and listen to what we write and present, they like what we talk about...they are happy because I am talking about something they are dealing with" Saber told CNN.

Earlier this year she launched the radio show to complement her blog called "I Want A Divorce."

In 2008 the number of Egyptian couples who divorced increased 8.4 percent over the previous year, according to the Central Agency for Public Mobilization and Statistics (CAPMAS).

In most cases couples simply don't know how to deal sexually with their partner
--Dr Heba Kotb, Egyptian sexologist

Nearly 40 percent of marriages in Egypt now end in divorce, making it the highest rate in the Arab world. Egypt is also one of the few countries in the region where the topic is discussed so freely, thanks largely to the initiative of outspoken women.

"Women are taking advantage of new media outlets to voice their concern," said Nadya Khalife, a Human Rights Watch researcher focused on women's issues in the Middle East. "They are talking more openly about these issues. They are becoming less shameful in Egyptian society."

Those issues include sex. Dr. Heba Kotb is a leading sexologist in Cairo who appears regularly on TV. She has two PHD's, one in sexuality from the University of Florida, and she considers herself a conservative Muslim. Dr. Kotb attributes 80 percent of divorce in Egypt to sexual problems.

"In most cases couples simply don't know how to deal sexually with their partner," she told CNN. "I provide the information -- this is right, this is wrong, you should do this."

"Often it is just miscommunication. The psychology of men is not understood by women and vice versa."

When Dr. Kotb started her practice eight years ago, she saw only a handful of patients per week. Today she is booked months in advance. "People now think it does not have to be the end of the marriage when they have problems. [They think] it's worth it to give counseling a try."

For Egyptian women, getting divorced has traditionally carried with it a severe stigma. "The main perception of a woman who is divorced in Egypt, or in any Arab country, is that she is evil or something is not right ... that she has done something wrong" said Saber. "I started Divorce Radio to change that view."

"The stigma has nothing to do with religion. It's culture," said Madiha el Safty, professor of sociology at the American University in Cairo. "Egypt is a patriarchic society, very male-dominated. Men always blame women for all their problems, but the stigma [against divorced women] has eased"

"It has to do with the the rights of women. Now we have more rights -- in education, employment, we have more economic independence. So [women] are less willing to accept an unhappy marriage," Dr. Kotb told CNN.

Dr. Kotb also blamed the high rate of divorce on the fact that "a relationship equals marriage" in Egypt. "In the West, it's a matter of breaking up. Here there is no living together."

Saber agreed: "In Egypt, there is no space to have a relationship without marriage. It's the dream of every girl in Egypt to get married," she said.

In Egypt marriage falls under family law, which is based on Shari'a, Islamic religious law, and which gives men and women unequal rights to a divorce.

Women, on the other hand, can get a divorce only through court action, in a much more formal legal process.

In 2000, Egypt liberalized their laws, granting women the right to initiate a "no-fault" divorce (khula). Though this is considered a step forward, women are still required through khula to relinquish any claim to alimony or their dowry.

"There was an effort to modernize divorce," said Prof. Sawma. "Before, the man was not obligated to agree to a divorce."