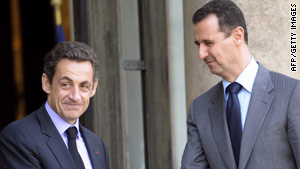 "This peace process cannot only be relaunched by one party. Syria wants peace and we have a mediator, Turkey, which is ready to use its mediation role as well as the European partnership. What we are missing is the Israeli partnership, and we need it in order to renew peace talks and obtain results," Assad told reporters.

Assad traveled to France, sat down with President Nicolas Sarkozy on Friday for a one-hour lunch, and held a press briefing, where he blamed Israel for the stalled talks with Syria.

Turkey recently had mediated indirect talks between Israel and Syria, neighboring countries that have been adversaries for years. Among their many differences are Israel's occupation of the Golan Heights from Syria in the 1967 Six Day War and Syria's ties with Iran and anti-Israel militants.

His visit to Paris comes days after the visit of Israeli Prime Minister Benjamin Netanyahu. Questioned on Netanyahu's statement that Israel was ready to relaunch peace talks Syria without pre-conditions, Assad emphasized that if Israel is serious about talks, Syria is ready to send experts to Turkey and begin discussions with Israeli experts.

Asked if he was ready to meet Netanyahu in person at some point without conditions, Assad didn't say he would or wouldn't, but said it would depend on the subject of the discussion.

"Are we talking about the menu or about land restitution? We must talk about territory restitution. For this matter, mechanisms and a framework exist. The negotiators know the mechanisms. It is neither me nor Netanyahu," he said.

Asked about the role of France in the peace process, Assad said he hopes France backs the relaunch of the peace negotiations through Turkey and persuades Israel to accept this mediation process.

As for the peace process in the wider Middle East, he said it will only work if Israel stops tearing down the other side's rights and demands.

Assad said he and Sarkozy discussed living conditions in the Hamas-controlled Palestinian territory of Gaza -- reeling from the ongoing conflict with Israel, including the fierce Israeli offensive against militants that began late last year after constant rocket attacks on Israel by Gaza guerrillas.

Saying a civilian was shot on Friday by Israeli troops, Assad said he asked Sarkozy to stop violence against civilians in the territory.

Israel Defense Forces and Gaza security sources both confirmed an incident, but the sides had different accounts.

The IDF said soldiers identified a number of suspected terror operatives who appeared to be planting explosive devices adjacent to the northern Gaza security fence near "the Karni humanitarian crossing." The soldiers opened fire and identified hitting two of the suspects -- one of which was transferred to an Israeli hospital; the other operative died of his wounds. Three other suspects were taken for questioning.

The Palestinian security sources said a special force opened fire on a number of youths near the border fence with Israel in central Gaza. One of the youths was killed and four others were taken by the Israeli soldiers.