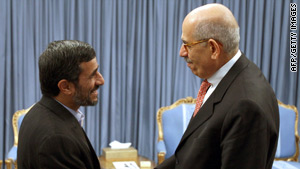 (CNN) -- In a report published Monday, the United Nations nuclear watchdog group says Iran's disclosure of a previously secret nuclear facility near Qom raises questions about the existence of other such facilities.

And Iran's delay in acknowledging the facility "does not contribute to the building of confidence" in Tehran, the International Atomic Energy Agency report says.

In addition, "there remain a number of outstanding issues which give rise to concerns, and which need to be clarified to exclude the existence of possible military dimensions to Iran's nuclear program," said the report, published on the Institute for Science and International Security Web site. A source with direct knowledge of the report confirmed its authenticity to CNN.

"The IAEA's latest report on Iran underscores that Iran still refuses to comply fully with its international nuclear obligations," U.S. State Department spokesman Ian Kelly said in a written statement. "The most recent example of continued noncompliance is Iran's failure to disclose the Qom enrichment facility to the IAEA consistent with Iran's IAEA safeguards obligations."

During a meeting in Tehran, Iranian officials told the inspectors that construction of the site had begun late in 2007, the report said, and it would not be operational until 2011.

However, the IAEA inspectors told Iran "it had acquired commercially available satellite imagery of the site indicating that there had been construction at the site between 2002 and 2004, and that construction activities were resumed in 2006 and had continued to date," the report said. IAEA member states also allege that design work on the facility, the Fordow Fuel Enrichment Plant, began in 2006, the report said.

"The agency further indicated that it still had questions about the purpose for which the facility had been intended and how it fit into Iran's nuclear program," according to the report.

Iran remains bound by terms of a 2003 agreement under which it is obligated to provide information to the IAEA regarding nuclear facilities as soon as the decision to build is made or the construction authorized.

"While the agency has confirmed that the plant corresponds to the design information provided by Iran, Iran's explanation about the purpose of the facility and the chronology of its design and construction requires further clarification," the report says

In a report Monday, Iran's government-funded Press TV emphasized that the IAEA "confirmed that the country's nascent nuclear plant ... corresponds to the design information provided to the agency." It also pointed out that Iran granted the IAEA access to all areas of the facility, as confirmed in the report.

"While the U.N. nuclear watchdog said that 'the facility was at an advanced stage of construction,' it confirmed that 'no centrifuges had been introduced into the facility,' " Press TV said. The report, it said, "moved to allay Western fears about Iranian nuclear activities."

The IAEA report said it is "essential" that Iran address questions about its nuclear program and how it relates to its military, including the "procurement and R&D activities of military-related institutes and companies that could be nuclear-related." Tehran should also clarify the "production of nuclear-related equipment and components by companies belonging to defense industries," the report said.

The agency encouraged IAEA member states that have provided it with information about Iran to share that information with Tehran as well.

The United States and its allies fear Tehran's nuclear program is aimed at making a bomb, while Iran has insisted the program is for peaceful purposes.

Recently, America and other leading nations have been negotiating with Iran to send low-enriched uranium abroad to be turned into material for use in medical research and treatment at a reactor in Tehran.

"Now is the time for Iran to signal that it wants to be a responsible member of the international community," Kelly said. "We will continue to press Iran in ways consistent with the dual-track approach to meet its international nuclear obligations."