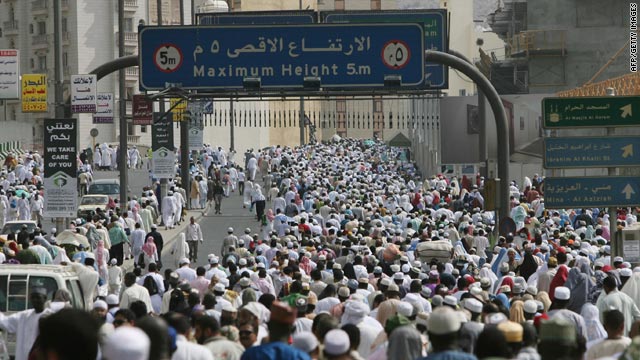 Hundreds of thousands of Muslims crowd the roads toward the Grand Mosque in Mecca, Saudi Arabia, on Friday.
STORY HIGHLIGHTS

Mecca, Saudi Arabian (CNN) -- A teenager and three elderly people in Saudi Arabia for the hajj pilgrimage have died of the H1N1 flu virus, the Saudi Health Ministry said.

The victims of the virus were a 17-year-old Nigerian female and a Sudanese man, an Indian man and a Moroccan woman who each were 75 years old.

"These cases were discovered too late," said Dr. Khaled Al-Marghalani, the ministry spokesman. "Some were old, and the others had pre-existing chronic conditions."

Al-Marghalani said the Sudanese man initially went to a doctor who treated him, but not for H1N1.

"So when his doctor sent him to the hospital, and he was treated for H1N1, it was too late," he said.

The annual pilgrimage to Mecca, Saudi Arabia, is required of Muslims at least once in their lives, and millions of people around the globe make the trek to attend. This year, the hajj begins Wednesday, and many pilgrims have been arriving days and weeks ahead of the event, which coincides with flu season.

When Arab health ministers met in Cairo, Egypt, a few months back, it looked like several groups might even be banned from this year's event because of the flu. They were children under 12, adults over 65, pregnant women and people with chronic illnesses.

The Saudis didn't ban anybody from coming and left the responsibility to the pilgrims' countries of origin. In effect, officials issued guidelines only for people at risk.

"It would be nice to have more time to prepare [for the possibility of H1N1 spreading in Saudi Arabia] ahead of the hajj, but I am very satisfied with all the measures taken and have great confidence," he said before the meeting.

Al-Marghalani said the "safe weapon" for the kinds of H1N1 cases that resulted in the deaths is Tamiflu, the drug used to fight influenza.

"If we lose Tamiflu, we will lose the war. But Tamiflu is only effective in the first 48 hours of when the symptoms appear," he said.