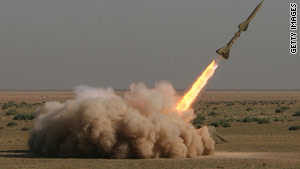 Iran's regular military and its elite Revolutionary Guards were to participate in the exercise against aerial attacks, especially against Iran's nuclear plants, according to Press TV.

The report did not offer further details about the scope of the exercise, but came as world powers have been strategizing about how to deal with Iran's apparent rejection of a key part of a nuclear deal.

The United States, Russia, China, Germany, France and the United Kingdom, along with the European Union, are trying to map a way forward on Tehran's controversial nuclear program. They seek to reduce international fears that Iran wants to develop nuclear weapons.

On Wednesday, Iranian Foreign Minister Manouchehr Mottaki said his country refused a request to send its partly enriched uranium abroad to be turned into material for medical research.

However, he said, Tehran might allow the nuclear material to be reprocessed inside Iran, the semiofficial ISNA news agency reported.

The nuclear deal, hammered out in October with the help of the International Atomic Energy Agency, is aimed to reduce the amount of raw material Iran has to build a nuclear bomb.

President Obama has warned of "consequences" if Iran does not accept the plan.

Iran says it intends to produce nuclear energy only for peaceful purposes, including civilian electricity and medical research.

Iranian media reported on Saturday that, according to a senior Iranian lawmaker, the country is capable of producing partly enriched uranium up to 20 percent, but had requested to buy the fuel from other countries instead. The move was described as a sign of good will.

"Given that Iran is capable of enriching uranium to a level more than 5 percent inside the country, it could well take a step to produce the fuel for its Tehran (research) reactor," said Kazem Jalali, of the parliament's national security and foreign policy commission, according to Press TV.

However, Iran sees buying the fuel as a better option, he said.