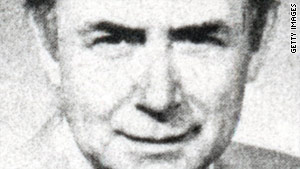 Alec Collett was 63 when he was abducted.
STORY HIGHLIGHTS
RELATED TOPICS

Alec Collett was on assignment for the U.N. Relief and Works Agency for Palestine Refugees in the Near East, or UNRWA, when he was kidnapped in Lebanon in 1985.

The British national was 63 years old at the time.

"Although he is saddened by Alec Collett's death, he hopes that the actions taken to find his remains can provide a measure of comfort to his loved ones," the statement from Ban's representative said.

Collett's abductors released two videotapes during his first year in captivity, in which Collett sent messages to his family, according to the U.N.

In April 1986, a Beirut television station received a videotape that purportedly showed Collett being hanged, but the United Nations said it was impossible to formally identify whether or not it was him.

Since then, nothing further had been heard about Collett's fate, despite repeated requests, the U.N. said.

Collett had been visiting various UNRWA operations in Lebanon as part of a three-month consultancy mission when he was kidnapped on March 25, 1985 in the midst of Lebanon's civil war while riding in a car near the Beirut airport, according to the U.N. His driver, an Austrian national, was also abducted, but later released.

Collett was the first U.N. employee to be kidnapped in Lebanon.

A group calling itself the "Revolutionary Organization of Muslim Socialists" claimed responsibility for the kidnapping. In the months that followed, several other UNRWA staff members were kidnapped, but later released.

Collett was married to an American, Elaine Collett, and their son Karim was 11 years old at the time of his kidnapping.

During his 35-year career as a journalist, Collett worked in Prague as a newspaper correspondent for several British publications after World War II, as well as an Associated Press reporter in New York and at the United Nations.