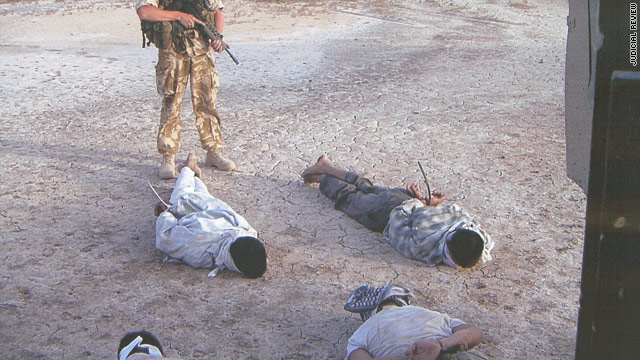 An armed soldier stands over prisoners face down on the ground with their hands bound.
STORY HIGHLIGHTS

London, England (CNN) -- British Defence Secretary Bob Ainsworth announced a public inquiry Wednesday into allegations that Iraqis were killed and abused after a firefight more than five years ago in the southern part of the country.

The allegations center around the aftermath of a fight in May 2004 at the so-called Danny Boy checkpoint in Maysan Province.

Former detainees and the family of a slain Iraqi contend at least 20 people were killed and others were abused at Camp Abu Naji after a fight between British soldiers and Iraqi insurgents.

That claim has been denied by the UK Ministry of Defence -- which says the 20 people died in battle and people detained were not mistreated.

The probe is called the Al Sweady inquiry -- named after the family of the dead Iraqi. Thayne Forbes -- who retired from the High Court Bench last year -- will chair the inquiry into allegations.

The inquiry will look into allegations of "unlawful killings" and the "ill-treatment of five Iraqi nationals detained at Camp Abu Naji." Even though the probe will focus on five detainees, attorneys claim nine people were detained and abused.

The defense ministry disputes those allegations.

"We have found no credible evidence that those detained, as a result of the attack on British troops and the prolonged firefight at Danny Boy checkpoint, were mistreated," the defense ministry said in a statement.

The release of a photo published in British media and obtained by CNN about the incident shows an armed soldier standing near four people face down on the ground with their hands bound behind their backs and their faces covered.

Attorneys for the men say they were beaten and evidence shows a breach of the Geneva Conventions prohibiting humiliating and degrading treatment of prisoners. But, the defence ministry disputes that.

"It is important to remember that our first priority at the end of such attacks is to protect our personnel from further threats," the ministry said.

CNN's Atika Shubert and Per Nyberg contributed to this report.