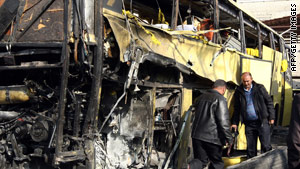 (CNN) -- An explosion killed or wounded dozens of passengers in a bus in the Syrian capital, Damascus, Thursday morning, an official in the president's office said.

It was unclear whether the blast took place on the bus, under it or nearby. It was also not immediately clear exactly how many people died in the blast in the Zinab neighborhood.

The neighborhood is home to a shrine for Shia Muslims.