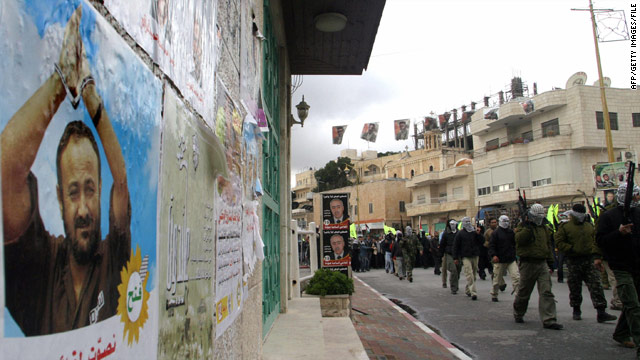 Palestinian militants march past a wall poster of Marwan Barghouti in 2006.
STORY HIGHLIGHTS

Jerusalem (CNN) -- One of the key players in Palestinian politics and therefore in any future peace talks with Israel has spoken to CNN from his Israeli prison cell. Marwan Barghouti is serving five life sentences following his conviction in an Israeli court on murder and other charges related to his role in planning attacks on Israelis during the second Intifada.

He is considered by many Palestinians to be the most important prisoner who might be released in a deal for captured Israeli soldier Gilad Shalit.

For many Palestinians he is the only political successor to Mahmoud Abbas who recently announced that he would not be seeking re-election for the office of President of the Palestinian Authority.

Barghouti is a member of the central committee of Fatah, and a member of the Palestinian Legislative Council. From Hadarim prison he answered CNN's questions through his lawyer, Khader Shkirat.

When there is a permanent date for the presidential and legislative elections, and when national reconciliation has been achieved, and when we are capable of holding elections in the West Bank, Gaza and Jerusalem, then I will take the appropriate decision. I am proud in obtaining the popular support from the Palestinian people in and outside of the country, and also getting on the most votes in the polls that have been conducted along these years.

Some of the media have you described you as a "Palestinian Nelson Mandela." Can you ever hope to satisfy these incredibly high expectations?

I highly respect the experience and resistance of the great African leader Mandela, who led his people to independence and freedom. I wish to be able to contribute in achieving freedom and independence for the Palestinian people. Mandela succeeded because he found a partner like de Klerk, but in Israel there is no de Gaulle that ended the French colonization of Algeria and also there is no de Klerk that ended the Apartheid regime.

Have you changed at all during your years in prison? Have your political views and approach to politics changed?

Prison is a very harsh and bitter place especially since I spent most of my time in solitary confinement then in group confinement, but my political views have not changed. I believe in a two-state solution living side by side in peace and security, and I consider that the key to peace between Israelis and Palestinians is the end of the Israeli occupation and the withdrawal to 1967 borders.

The Palestinian Authority has come a long way in fighting and reforming corruption, but this is not enough. The Palestinian Authority needs to do more. It is unfortunate and sad that there have not been any sentences or charges against any of those corrupt officials until now. We are in need now to reinstate a transparent and independent justice system, and to establish rule of law and the cessation of human rights abuses, and strengthening the individual freedoms, the freedom of the press and fostering political pluralism.

How would you resolve the conflict between Fatah and Hamas?

During my time in prison brothers from various parties and I were able to draft a prisoners document which became the framework for a national unity document that all 13 Palestinian parties signed on June 27, 2006. It is the first document in the history of Palestinian parties, that the PLO, Hamas, and Islamic Jihad participated in and agreed on a state with 1967 borders, and accepted the PLO and the president of the Palestinian Authority to negotiate in the name of Palestinians, and accepted the call for a national unity government. The conflict will be resolved by referring back to this document and with the signature of all [parties] on the Egyptian national reconciliation document, and by resorting to presidential and legislative elections, and by respecting the law and ending internal strife and through the reestablishment of a national unity government.

Your approach to the Palestinian-Israeli conflict has been described as one of "resistance and negotiation." What kind of resistance does this mean? Bombs? Rock-throwing? Civil disobedience? Sit-ins and marches?

All freedom movements negotiated and resisted, and what I mean by resistance is the one that is permitted under international law and has international legitimacy.

At this stage the political, diplomatic and negotiating approach, in addition to the popular peaceful resistance, is an acceptable matter in keeping with the existing conditions. It is the right of the Palestinian people to resist the Israeli military and settlement occupation which the International Court of Justice at The Hague has approved in addition to international law, the United Nations charter, and all religions.

Do you think there is any hope for your release in a prisoner exchange any time soon?

I am part of the list that Hamas is negotiating over, and I have high hopes and expectations to be released in this deal.

How do you feel when Israel trades up to 1,000 Palestinian prisoners for just one Israeli soldier?

Israel is holding inside its prisons and detention facilities more than 10,000 Palestinian prisoners, some of whom have spent more than 32 years of their life inside prisons. Also, Israel detains hundreds of prisoners without trial or charges or anything. Israel is an occupying country that uses oppression and aggression against the Palestinians for decades. It confiscates land, builds illegal settlements, kills and assassinates, and arrests close to 500 Palestinians on a monthly basis, establishes and erects military checkpoints, besieges the Gaza strip. The Palestinians have one soldier to return for 10,000 prisoners, so it is natural to request the largest possible number. For Israel the soldier is the army, and the army means the state. So the deal will release 100 percent of Israelis in return for 10 percent of the Palestinian prisoners.

Israeli politicians have been visiting you in prison. Why are they coming to you? What do they ask you about?

Not one single Israeli official has met with me since my kidnapping in April 2002, only a certain number of Israeli Knesset members have visited me. Most of them conduct many visits to prisons and meet with a number of prisoners. Most of the time the conversations are on developments in the political situation, and about the practices of the Israeli occupation. They listened to my point-of-view in which I have always maintained that the first day of peace between the Palestinians and the Israelis is the last day in the life of the occupation. And the two-state solution is the solution most capable of life even though it is becoming more difficult as time passes.