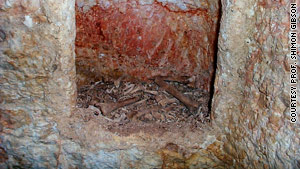 The shroud was found in a tomb complex on the edge of the Old City of Jerusalem.

Jerusalem (CNN) -- Researchers said Wednesday for the first time they have found what they believe to be pieces of a burial shroud from the time of Jesus.

The find is of importance because tests on the shroud and the body it wrapped revealed the earliest proven case of leprosy in the Old City of Jerusalem.

And in addition, the weave of the shroud raises fresh doubts about the Shroud of Turin, which many people believe was used to wrap the body of Jesus.

According to researchers involved in the excavation and subsequent testing, the recently discovered shroud lends more credible evidence that the Shroud of Turin does not date to Roman times when Jesus died but from a later period.

The latest shroud was found in a tomb complex on the edge of the Old City of Jerusalem.

"This is the first time that we have a shroud from the time of Jesus," said Shimon Gibson, the excavation director.

He called such a find in the Jerusalem area unique because the high humidity levels in the city do not normally allow for the preservation of organic material.

Gibson said the remains of the man covered in the cloth consisted of different wrappings for the body and the head, which was consistent with burial practices of the era. He also said research had shown that the weave of the cloth was a simple one, much different from the more complex Shroud of Turin's.

The origin of the Shroud of Turin, a burial cloth that some believe bears the image of Jesus, is a source of great controversy, with many academics arguing it dates from the Middle Ages and not the time of Jesus.

The burial cave, which has been dubbed the Tomb of the Shroud, was first uncovered in 2000 and was one of more than 70 separate family tombs of the first century. It is in a location described in the Bible as the "Field of Blood," next to the area where Judas, the apostle who betrayed Jesus, is said to have committed suicide.

Based on the tomb's location and the style of the shroud wrappings, researchers have said the shrouded man was an affluent member of Jerusalem society.

Because of the unique nature of the find, the remains of the shroud and the bodily remains were subject to molecular and DNA testing. Researchers said they were surprised to find that the shrouded man suffered from both leprosy and tuberculosis.

The discovery of leprosy was found in DNA samples taken from the skeletal remains and is the earliest proven case of the disease, according to Hebrew University professor Mark Spigelman.

It is likely the shrouded man died from tuberculosis, Spigelman said, and its presence in other remains found at the site suggest "the significant impact social diseases such as tuberculosis had on society from the low socioeconomic groups up to the more affluent families, such as Tomb the Shroud in first-century Jerusalem."