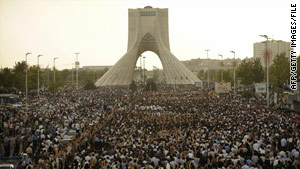 (CNN) -- Three Iranian prison officials have been charged with murder after three imprisoned protesters were beaten to death in the aftermath of the country's disputed presidential election, Iranian media reported Saturday.

Three were charged with premeditated murder for participating in the beatings; nine will face other unspecified charges. The judiciary did not identify the defendants.

Kahrizak officials initially said that Mohsen Rouhol-Amini, Amir Javadifar, and Mohammad Kamrani died of meningitis, according to the judiciary. However, a coroner's reported indicated that the three were severely beaten behind bars by prison personnel, and died from their injuries.

The judiciary also blamed the prison's medical shortcomings and sub-par conditions as factors in the men's deaths.

The three protesters were among some 4,000 people arrested in connection with protests following the June 12 presidential election. Thousands of Iranians demonstrated against the official result of the vote, which re-elected hardline President Mahmoud Ahmadinejad.

The opposition to the results and the mass arrests were a blow to Iran's Islamic leadership. Further tarnishing the image of the government's handling of the demonstrations was the identification of 72 protesters killed during the unrest, released by Iranian reformist Web site Norooz in September.

Putting the prison officials on trial is an attempt by the government to build credibility and maintain public order, some scholars say. But, they argue, it's a political move that will likely fail.

"Ayatollah Khamenei will be the loser no matter what happens," said Ali Alfoneh, a research fellow at the Washington-based American Enterprise Institute who has researched the relationship between Iranian civilians and the Islamic Revolutionary Guard.

"Does it make him more credible in the eyes of the government -- no, I don't think so."

He said the guards would likely be prosecuted in a "show trial," noting that the Iranian government has orchestrated such trials in the past by giving in to public demands for accountability, but without holding high-ranking officials responsible for their roles in any wrongdoing.

Another expert described the defendants as "scapegoats."

"Even if they are some lowly soldier or some lowly revolutionary guard who was doing this, it was obviously under the order of higher-ups," said Abbas Milani, director of Iranian studies at Stanford.

Amid earlier reports of prisoner mistreatment at Kahrizak, Khamenei ordered the facility shut down. Nearly two weeks later, Iranian media reported the deaths of the protesters. In the wake of the deaths, authorities fired and arrested Kahrizak's warden.

When Gen. Esmaeel Ahmadi Moghadam, commander of Iran's security forces, announced the arrest of the warden, he also said no one died at Kahrizak from physical abuse and that the inmates died from illnesses. The coroner later disputed that claim.

Despite earlier attempts by high-ranking Iranian officials to dispute allegations of abuse of detained protesters, government officials have also promised to investigate the supposed cases.

Such a dichotomy reflects Khamenei's desire to be both "feared and loved," Alfoneh said.

"The supreme leader and the regime want to show they are powerful and can't be shaken," he said, "and, on the other hand, they don't want to accept responsibility."

In August, Khamenei met with Rouhol-Amini's father, Abdol-Hossein Rouhol-Amini, vowing that "the system has no intention to forgive or be courteous to any wrongdoers."

The bereaved father announced on Khamenei's Web site in September that he was satisfied with how the government was handling the case.

But the trial will not help Khamenei's relationship with the public, Alfoneh said.

"Regardless of what the father says or does not say, the person responsible is Khamenei," Alfoneh said. "Whatever he does, he has lost this case."