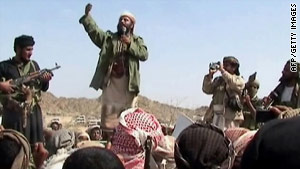 A man claiming to be an al Qaeda member addresses a crowd gathered in southern Yemen on Dec 22.
STORY HIGHLIGHTS
RELATED TOPICS

(CNN) -- Yemeni jets launched an aerial assault Thursday against suspected senior al Qaeda operatives meeting in a remote location, and about 30 militants were killed, according to the Yemen news agency SABA.

Without mentioning a number, the Yemeni Embassy in Washington said in a news release, "Preliminary reports suggest that the strike targeted scores of Yemeni and foreign al Qaeda operatives."

One of the militants may have been the radical Muslim cleric Anwar al-Awlaki, the embassy said.

Al-Awlaki recently told the Arab-language Web site of Al-Jazeera that he had been in touch with the U.S. Army psychiatrist accused of fatally shooting 13 people at Fort Hood, Texas, on November 5.

In that interview, al-Awlaki said Maj. Nidal Malik Hasan communicated with him via e-mail starting about a year before he went on the shooting rampage. Hasan wanted al-Awlaki's advice about killing U.S. troops, the cleric said.

"Nasser al-Wuhayshi, the regional al Qaeda leader, and his deputy, Saeed al-Shihri, alongside Anwar al-Awlaki, were presumed to be at the site (of Thursday's attack)," according to a news release from the Yemen Embassy in Washington.

Also among those targeted was Mohammed Saleh Oumair, who spoke a few days ago at a rally in Abyan province in southern Yemen, the government said.

The apparent purpose of the meeting was to plan a retaliation operation after Yemeni forces raided militant hideouts last week in Abyan and in Sanaa province, where the nation's capital is located, the embassy said.

In late July, Gen. David Petraeus, commander of the U.S. Central Command, and an accompanying delegation met with Yemeni President Ali Abdullah Saleh. One of the topics of discussion was how to better combat terrorism, according to SABA.