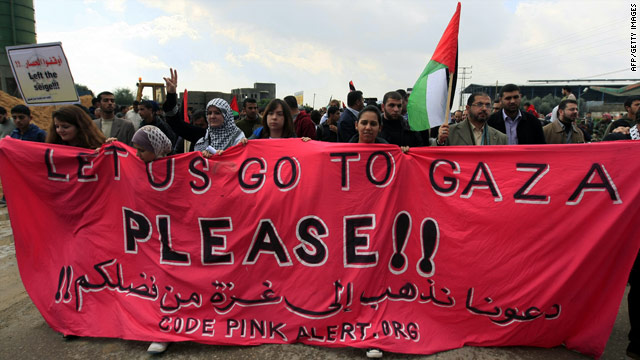 Jerusalem (CNN) -- Hundreds of protesters from the Gaza Strip and Israel converged on both sides of the main border crossing Thursday in an organized rally to call for the end of the economic blockade of Gaza maintained by Israel and Egypt.

Carrying Palestinian flags and signs calling for an end to "the Gaza siege" and "Israeli aggression," rally participants said they were trying to draw attention to the plight of Palestinians in Gaza.

On the Israel side, Knesset member and United Arab Party Chairman Ibrahim Sarsour called the continued blockade of Gaza "an ongoing tragedy for the Palestinian people" and called for it to be lifted to give people "a chance to live in dignity."

Among the international protesters in Gaza were three orthodox rabbis from the Neturei Karta movement, a small anti-Zionist Jewish sect that does not believe in the state of Israel.

Rabbi Dovid Feldman told a crowd that he was "humiliated by what is being done in our name" and that Israel is "simply using the name of Zionism to perpetrate a crime."

The Islamist group Hamas violently took over Gaza in 2007. Since then, the coastal strip of 1.5 million people has been subject to a punishing economic embargo by Israel and Egypt, which has greatly limited goods coming in and out and increased poverty in the war-torn territory. Israel, the United States and the European Union consider Hamas a terrorist organization.

Thursday's march coincides with the first anniversary of Israel's 23-day offensive against Hamas, launched in an attempt to stop militant rocket fire into southern Israel. The offensive, called Operation Cast Lead, resulted in the deaths of more than 1,000 Palestinians and 13 Israelis.

Dubbed the Gaza Freedom March, Thursday's event attracted the participation of about 1,400 international activists. Organizers said they planned to enter Gaza through Egypt, but only 100 of them were ultimately given permission to enter by the Egyptian government. Some of those who stayed behind in Egypt participated in a Thursday rally in downtown Cairo, according to organizers.

In the southern Israeli town of Sderot, a frequent target of militant rocket fire from Gaza, Israelis marked the Gaza war anniversary with a release of balloons with "messages of hope" from Israeli children to children of Gaza, organizers said.

"I think that the powerful message carried from children is sometimes better than the cunning negotiations for this or that Palestinian negotiator," said Yuli Edelstein, Israel's minister for public diplomacy. "They are probably talking peace, but at the same time making war."