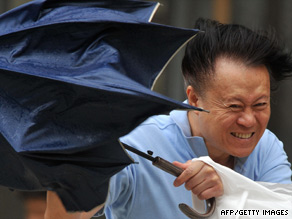 As of 3 a.m. local time, the storm's eye was over the northern part of the island, CNN forecaster Kevin Corriveau reported, although he noted that slow-moving Morakot is so large it encompassed the entire island.

The storm made landfall carrying winds of up to 92 mph (148 km/h), with gusts up to 115 mph (185 km/h), the Joint Typhoon Warning Center said. iReport.com: See balcony view of heavy rains

Corriveau said the storm was expected to linger over the island for several more hours, and the southern portion of Morakot would likely be passing over Taiwan for hours after that.

The storm's impact had already been felt by Friday morning, with mudslides and landslides occurring on the island.

Taiwan's Central News Agency, acknowledging the drought, cited the Water Resources Agency as saying that the storm had replenished the island's reservoirs and would put an end to water rationing in several areas.