(CNN) -- The fringes of Typhoon Morakot killed 10 people and injured 18 others in the Philippines, a spokeswoman for the National Disaster Coordinating Council told CNN. 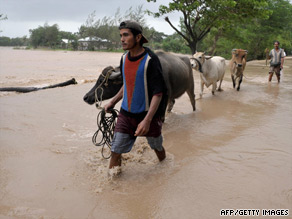 Residents walk along a flooded highway to safety in Zambales province, Philippines, on Friday.

Three French tourists died when their vehicle was swept into the water; two local tourist guides also died when they tried to rescue them, she said.

Heavy rain triggered at least 10 landslides, one of which destroyed a school, the spokeswoman said, adding that 23 structures were destroyed and six were damaged.

In Taiwan, two people died and four people were missing, according to local media.

The storm was dropping massive amounts of rain in Taiwan as well, despite being downgraded to tropical storm strength by Saturday morning, Corriveau said.

Some places in central and southern parts of the island saw nearly 1.3 meters (51 inches) of rain, and another meter (39 inches) were expected, he added.

The storm made landfall carrying winds of up to 92 mph (148 kph), with gusts up to 115 mph (185 kph), the Joint Typhoon Warning Center said. iReport.com: See balcony view of heavy rains

Taiwan's Central News Agency, acknowledging the drought, cited the Water Resources Agency as saying the storm had replenished the island's reservoirs and would put an end to water rationing in several areas.

All About Taiwan • Philippines • Weather