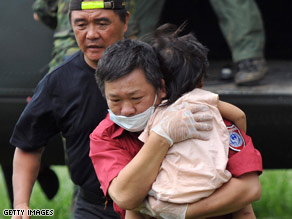 A rescue worker carries a child on Tuesday who survived flooding in southern Taiwan.

The typhoon, which stormed through the Philippines and Taiwan before slamming into eastern China over the weekend, has forced more than 1.4 million people to relocate on the mainland, China's Ministry of Civil Affairs said.

At least six people -- four of them in Zhejiang province -- were killed along the coast, and more than 6,000 homes were destroyed.

The village of Siaolin was one of several engulfed by flooding and mudslides in southern Taiwan's Kaohsiung County over the weekend, Taiwan's Central News Agency reported.

Villagers rescued from a massive mudslide in Siaolin said at least 300 others were feared trapped beneath debris, state-run media reported Tuesday. Liang couldn't confirm that figure, but said officials thought that more than 100 people were buried alive.

Helicopters plucked more than 60 survivors from Siaolin and headed back for 150 more people still struggling through the debris, he said. The mudslide buried roadways and cut water and electric supplies, Liang added.

Morakot caused the worst flooding in decades in Taiwan -- where floodwaters as high as 7 feet were reported, China Daily said.

The village of Siaolin was just one of several engulfed by flooding and mudslides in southern Taiwan's Kaohsiung County since Morakot arrived over the weekend, Taiwan's Central News Agency reported.

"The most pressing needs now are providing shelter, food and clean water for those who have had to evacuate their homes," said Hank Du, executive director for the humanitarian group World Vision in Taiwan. "We also want to make sure the children are secure and have a safe place where they are cared for."

The group has started to distribute food, cleaning supplies, raincoats, flashlights and other supplies to those displaced in several Taiwanese communities.

"Many of the affected live in remote areas, and the roads are in bad condition. Highways and bridges are flooded and blocked by mudslides, fallen trees and other large debris," said Wesley Chen of World Vision. "For those who can't reach shelters, we are working to find ways to bring aid to them."

In one coastal town, a massive mudslide crushed a half-dozen buildings and buried an unknown number of people, the Xinhua news agency reported Tuesday.

The mudslide occurred about 10:30 p.m. Monday in Pengxi township in Zhejiang province -- one of eastern China's regions hardest hit by Morakot, Xinhua reported, citing local authorities. The incident destroyed four-story apartment buildings standing at the foot of a mountain.

Rescuers pulled six survivors from the debris; one was in critical condition, according to Xinhua. However, it wasn't clear how many others were buried, and rescuers were hindered by huge piles of mud and rock.

The storm made landfall in the coastal area of Beibi town, Xiapu county, in Fujian province, about 4:20 p.m. Sunday (4:20 a.m. Sunday ET), according to Xinhua. Morakot's winds were clocked at 118 kilometers per hour (73 mph) in its eye, according to the province's meteorological bureau.