BEIJING, China (CNN) -- A mudslide triggered by torrential rains may have buried up to 800 villagers in southern Taiwan, media reports said Monday, as the country counted the cost of its worst flooding in decades. 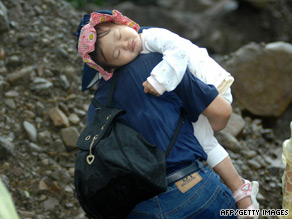 A girl is carried out from mudslide caused by Typhoon Morakot in southern Taiwan on Monday.

The death toll so far in Taiwan stands at 15, with 55 missing and 32 hurt, since Typhoon Morakot struck the island Friday and remained in the area over the weekend before crashing into eastern China, state-run China Daily reported.

Locals estimated there were about 5,000-6,000 people in the mountainous village when the typhoon struck.

Journalist Andrew Lee told CNN that it was difficult to know the exact number of people stranded or dead because "SOS" reports were still filtering in, and damaged communication and power lines were being repaired.

Watch more about the rescue effort »

He cited one report coming in that said 30 bodies had been spotted floating on the water close to a bridge in the area.

According to Lee, a number of other villages in the region had been washed away or buried by mudslides, with local government officials unable to determine the number of casualties.

Meanwhile, government officials said 1.5 million homes across the island were without electricity, and 440,000 were without water.

Watch as six-storey hotel topples over »

The storm -- measuring about 1,600 kilometers (about 1,000 miles) across -- continued to pummel China's populous east coast, but forecasters said it is unlikely that Morakot would reach Shanghai, the country's largest city, which sits farther north along the coast.

Chinese government officials expect the typhoon to cause more than 8.5 million yuan ($1.2 billion) in damages, the newspaper said.

The storm made landfall in the coastal area of Beibi town, Xiapu county, in Fujian province, about 4:20 p.m. Sunday (4:20 a.m. Sunday ET), according to China's state-run Xinhua news agency.

Morakot's winds were clocked at 118 kilometers per hour (73 mph) in its eye, according to the province's meteorological bureau, as cited by Xinhua.

Five houses were destroyed as the front of the typhoon brought flooding rains to Wenzhou city in neighboring Zhejiang province just after 8 a.m. Sunday, Xinhua said. Three adults and a 4-year-old boy were buried in debris about 8 a.m. Rescuers could not save the child, the city's flood-control headquarters told the news agency.

Watch a dog escape as house is swept away »

As the eye of the storm reached Beibi, the sky turned completely dark, and people caught in rainstorms staggered as they used flashlights to see, Xinhua reported. Trees were uprooted and torn apart by damaging winds.

Among the victims of Typhoon Etau was a 68-year-old woman who died when a landslide caused a hill to collapse on her home in Okayama prefecture, police said.

In neighboring Hyogo prefecture, an 86-year-old woman was found dead in her flooded house and a 54-year-old man in his submerged car.

Officials expect the number of victims to rise as torrential rains continue.

CNN's Yoko Wakatsuki and Eileen Hsieh contributed to this report.