(CNN) -- Tropical Storm Ana threatened the Caribbean on Saturday, but it was too early to know how much trouble the first named storm of the 2009 Atlantic hurricane season might cause. 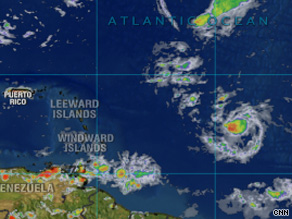 Ana formed overnight and was expected to gain strength as it moved west toward the Leeward Islands, where forecasters expect it to hit on Monday.

The Dutch Antilles issued a storm watch for St. Maarten, Saba and St. Eustatius, meaning tropical storm conditions are expected in the islands within 36 hours, according to the Miami, Florida-based National Hurricane Center.

For now, the center has advised the Virgin Islands and Puerto Rico to monitor the storm's progress.

The storm is expected to turn west-northwest over the next few days, the center said.

Ana may eventually hit Haiti and the Dominican Republic, but forecasters can't say whether Ana will strike the continental U.S.

Further east in the Atlantic, Tropical Storm Bill has developed and is expected to become a hurricane Wednesday.

Forecasters say Bill could evolve into a Category 3 hurricane as it approaches the Leeward Islands by Wednesday or Thursday. Bill was about 820 miles (1,320 km) west-southwest of the Cape Verde islands at 5 p.m. ET.

All About Hurricanes and Cyclones