Jimena closes in on Baja; Erika forms in Atlantic

CABO SAN LUCAS, Mexico (CNN) -- Hurricane Jimena weakened to a Category 3 storm Tuesday afternoon, but remained dangerous as it bore down on the Mexican peninsula of Baja California, with the resort town of Cabo San Lucas in its path. 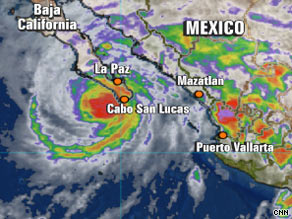 Jimena bears down Tuesday evening on Baja California, with the resort town of Cabo San Lucas in its path.

"A gradual weakening is forecast during the next 24 to 48 hours," the weather service said. "However, Jimena could be near major hurricane strength when it makes landfall."

The storm's center is forecast to come ashore on Thursday morning, but the weather service warned that "because it will be moving parallel to the coastline, any slight change in direction could have a huge impact in the location and timing of landfall."

Mexico's government extended a hurricane warning for most of the southern half of the Baja peninsula -- from Punta Abreojos on the peninsula's west coast to Mulege on its east coast, according to the National Weather Service.

A hurricane warning means hurricane conditions are expected within the warning area in the next 24 hours and people should quickly prepare "to protect life and property."

"A dangerous storm surge along with battering waves will produce significant coastal flooding along the Baja California Peninsula," NWS said.

On its current track, Jimena's center will approach the peninsula's southern portion later on Tuesday and central Baja California peninsula by Thursday, the weather service said.

In addition to damaging winds, the storm could bring as much as 15 inches of rain, forecasters said.

Jimena -- the 10th named storm of the Pacific season -- was centered about 85 miles (135 km) west-southwest of Cabo San Lucas, according to the weather service. It was traveling north-northwest near 12 mph (19 kph).

On Tuesday, the skies in Cabo San Lucas were overcast and gusts of wind began to pick up. There were good waves for surfing, but popular beaches were devoid of tourists. Red flags warned people to stay out of the water, in case they needed any reminding.

The day before, airlines offered extra flights to leave the area.

"The wind is refreshing a little bit because of the high temperatures we've gone through in the past few days," he said.

But Alvarez, like other locals, had work to do in preparation of Jimena.

"We protect the property by dismantling all that could be dangerous, fly or can be broken," he said.

Authorities had asked about 10,000 people to evacuate the area, but many had decided to wait out the storm.

Cuauhtemoc Morgan, a local resident of Los Cabos who sent videos to to CNN's iReport, said residents had protected every home in his neighborhood, fortifying windows with masking tape. Lines at supermarkets were long with worried residents preparing for the storms, Morgan said. See iReport videos

Authorities were setting up shelters in schools and trying to devise a plan to protect the homeless, he added.

The Pacific isn't the only place seeing action.

As of 8 p.m. ET Tuesday, tropical storm watches were issued for the Caribbean islands of St. Maarten, Antigua, Barbuda, St. Kitts, Nevis, Anguilla, St. Martin and St. Barthelemy by the governments of France, the Netherlands Antilles, and Antigua and Barbuda, according to the hurricane center. A tropical storm watch means that tropical storm conditions, including winds of at least 39 mph, are possible within 36 hours.

Erika's center was about 390 miles (625 km) east of the northern Leeward Islands, the hurricane center said. Its maximum sustained winds were near 50 mph (80 kph), with higher gusts.

While Erika meandered Tuesday afternoon, it was expected to start moving west-northwest at about 9 mph during the night.

"Some slow strengthening is forecast during the next couple of days," forecasters said.

The storm was moving west-northwest at near 9 mph (15 kph), and was expected to continue doing so for the next couple of days, the hurricane center said. Tracking maps put the storm east of the Bahamas by Sunday. On the forecast track, Erika should remain northeast of the Leeward Islands, forecasters said.

All About Hurricanes and Cyclones • Mexico • Baja California