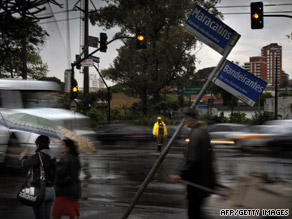 Flooding and landslides have wreaked havoc across the state, especially in the southern region. More than 1.5 million people have been affected by the severe weather, with as many as 1.1 million losing electricity for a day earlier in the week, Alves said.

At least 1,906 people are staying in government shelters, while nearly 10,650 have sought safety at the homes of relatives and friends, he said.

So far, 67 municipalities in Santa Catarina have declared states of emergency; the western municipality of Guaraciaba has declared a state of "public calamity."

Eleven municipalities declared a state of emergency in a second battered state, Rio Grande do Sul, according to the state's Web site. Rio Grande do Sul is south of Santa Catarina and shares a border with Uruguay. Close to 200 families were in shelters and parts of the state's capital, Porto Alegre, was flooded.

Some traveled in motor boats in flooded areas and homes were almost entirely covered by rain water, video from TV Record showed.

The water level of the state's Taquari River is more than 32 feet above normal, officials said.

In Santa Catarina, the September rainfall average is about 8 cubic inches. However, at least 11 cubic inches fell over three days this past week, Alves said.

Forecasters expect total rainfall for the area to top 24 cubic inches this month, he said.