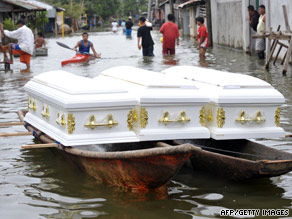 A boatman transports three empty wooden coffins on the edge of Laguna Lake east of Manila on Thursday.

Four people had been found alive in debris, and at least 22 had been injured by landslides that started Thursday afternoon and continued all night, affecting several municipalities, said Elmer Foria, police senior superintendent.

Parma, which had been downgraded from a typhoon, poured more rain onto sodden and already weakened ground.

Since the rains started in central Luzon, three dams in the Pangasinan area have been releasing vast amounts of water -- up to 10 million cubic meters per hour at one dam, dam officials said.

Water passing through the three dams -- the Ambuklao, the Binga and the San Roque -- is rushing into the Agno River, which has been swollen since Thursday and affects seven towns in eastern Pangasinan, dam officials said.

Water released from the San Roque dam has contributed to the flooding in eastern Pangasinan, acknowledged Alex Palada, division manager for flood forecasting and warning of the National Power Corporation. Dam officials had no choice but to maintain safe water levels, he added, noting that he alerted Pangasinan Governor Amado Espino. The governor started to evacuate residents Thursday when the Agno River started to rise, Palada said.

In the last several days, water has become the Philippines' biggest enemy, as Parma, locally known as "Pepeng," dumped as much as 36 inches (91.4 centimeters) of rain in some parts of the nation of islands, compounding misery in areas already flooded by earlier storm Ketsana.

Parma was forecast to have winds of no greater than 39 mph (63 kph) by Friday.

The U.S. Navy was expected to join rescue operations in Pangasinan, according to the agency.