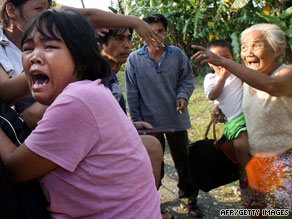 Frightened San Manuel villagers flee after rumors spread that nearby San Roque dam is in danger of collapse.

Another 93 people have been injured, according to Nalia Tabliago of the Philippines National Disaster Coordinating Council.

Tropical depression Parma, known locally as Pepeng, dumped as much as 36 inches of rain in some parts of the nation of islands last week, compounding misery in areas already flooded by an earlier storm, typhoon Ketsana

On Friday, landslides blocked traffic along the Marchos Highway, Naguilian Road, Kennon Road and Ambuklao Road, cutting access to Baguio City, Benguet Province and Mountain Province, according to the Office of Civil Defense in Cordillera.

Since the rains started in central Luzon, three dams in the Pangasinan area have been releasing vast amounts of water -- up to 10 million cubic meters an hour at one dam, officials said.