Biz leaders should focus on people not targets, says report

By Matt Knight, for CNN 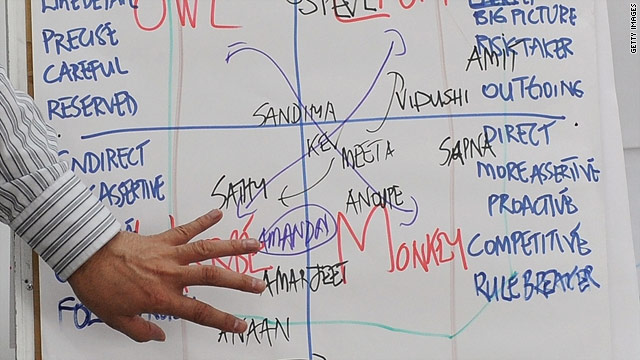 "Outstanding" leaders don't focus on targets, they focus on people, says a report by the UK's The Work Foundation.
STORY HIGHLIGHTS
RELATED TOPICS

London, England (CNN) -- If you thought effective leadership was all about cracking the whip and relentlessly focusing on targets, think again. A people-centered approach is far more effective, argues a new report.

"Exceeding Expectation: the principles of outstanding leadership" published by UK employment organization, The Work Foundation argues that the best leaders have an "almost obsessive focus on people" which they ally to "a drive for high performance."

More than 250 in-depth qualitative interviews -- including nearly a third with senior leaders -- were conducted for the report. Leaders were classed as either "good" or "outstanding," with their differences split into 17 categories.

For example, good leaders were those who would "give time to others" or "tends to focus on work," whereas outstanding leaders would "focus on people as a route to success" or "seek to understand people and motives."

The authors conclude that "outstanding leaders focus on people, attitudes and engagement, co-creating vision and strategy."

Penny Tamkin, the report's lead author says she didn't set out to prove or disprove any current management theories, but the people-oriented slant of the results came as a surprise.

"I think I expected that very busy, very senior people would see their workforce as one element of what they had to attend to and that they would give them appropriate concern but not necessarily be the key thing," Tamkin told CNN.

"But what came across was this incredibly strong sense that outstanding leaders were deeply people-centered, which meant they spent a lot of time on it."

Tamkin and her team spent around three hours interviewing each leader, exploring their management beliefs, how they put their leadership into practice, how they form relationships and how they convey and create vision.

What came across in most cases was a real passion for people, Tamkin says, which has positive knock-on effects.

"Leadership that focuses on mutuality and respect is not only good for people but good for organizations too," she adds.

Firstly, they think and act systematically, seeing the whole picture rather than compartmentalizing.

Secondly, they see people as the route to performance -- meaning they are committed to forging better relationships with employees.

And thirdly, they are self-confident without being arrogant, which means self-awareness is one of their key attributes.

Targets and goals, the report points out, are vital for any business looking to prosper. But outstanding leaders tend not to focus on these, thinking of them as more of a by-product of effective management.

"It's always about targets, it's always about purpose. Outstanding leaders are always driving for something," Tamkin says. "It's not that they ignore targets it's just not where they put their main effort. They believe targets will emerge from a focus on people."

There are, of course, circumstances where focusing on targets is completely justified and necessary as Tamkin explains.

"When leaders have new people on their team they have to build people's capability, enthusiasm and confidence. You have to take a stronger steer until the point when people can fly themselves."

Having a people-centered approach especially during difficult economic times is a strategy that Iain Densten, Professor of Leadership at the Lancaster University Management School in northern England agrees.

"When things get tough, sometimes leaders have got to almost do the opposite. Instead of walking in and saying: 'I'm cutting your budget by 20 percent' and walking out the door, they've got to engage people and say: 'How can we solve this?'"

The urgency which an economic crisis presents is a key issue for leadership, says Densten.

"Urgency can motivate people to change their views to seek out new answers. Urgency is a powerful source of motivation to challenge what they are doing. Just being hard-nosed doesn't really change things, particularly in the long term."