'Business is war, learn from the battlefield,' ex-soldier tells bosses 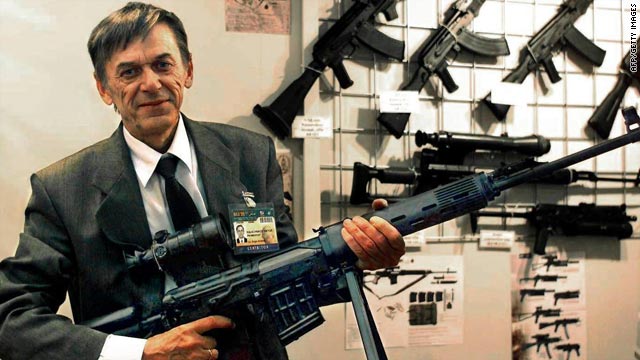 Is Victor Kalashnikov's pose your boss's idea of running a military-style operation at work?
STORY HIGHLIGHTS

London, England (CNN) -- Many bosses like to run their businesses in a way that suggests they've missed their vocation in life, such is their fondness for barking orders at their staff. All they seem to lack are some epaulettes, a peaked cap and a one-way ticket to a military academy.

But the idea that military operations are little more than servile obedience exercises is wrong -- in fact, it's about as far from the truth as you could get -- according to Ian Gardiner, a former British Royal Marine.

"Tens of thousands of decisions are taken daily by the lowest paid people on which success or failure depends. That's how it happens on the battlefield. A lot of business people don't understand that," Gardiner told CNN.

Gardiner's career took in tours of duty in Oman, the Falklands War in 1982 and several postings in Northern Ireland. He also served with NATO during the Kosovo conflict in 1998/99.

Since retiring in 2001, he's devoted a lot of his time speaking to captains of industry about the hard-fought lessons of war and how they can apply them to business.

Organizations need guidance not interference from their top brass, he says, and importantly, they need to encourage all their staff to make decisions.

In many organizational respects, business and war are very similar.

"They are both trying to achieve goals in a fast moving, dynamic sometimes hostile environment with scarce resources through the agency of people," he said.

What we are good at in the army is getting ordinary people to do extraordinary things. And that's what business is very bad at.
--Ian Gardiner, former Royal Marine
RELATED TOPICS

And there are some key military lessons that business would do well to heed, he says.

First, you need to know what you are doing.

"Modern military organizations have developed doctrines called 'mission command' or 'mission-based leadership' which is an acknowledgement that no military person will go into action without knowing what he is trying to achieve and why," Gardiner told CNN.

Most businesses have no clear idea of what they are trying to achieve and why, he says. He dismisses many multinational companies' mission statements are just "PR nonsense."

"The mission is something hammered out at the highest level and is functional, realistic, sustainable, analyzable and comes in one sentence: 'We are doing this in order to achieve that.'"

From here you can measure risk, examine your markets and your customers' needs.

Culture supplements the mission and is about providing training and encouragement. This helps to inspire people to make decisions in your name, Gardiner says.

Business leaders must acknowledge that they cannot make decisions about everything -- and cannot know what's happening in every department.

"It's about people, people, people," he said. "Businesses get hung up on what they call management. What they fail to understand is that all the assets that managers manage -- the ones that make or break them -- are the people.

A fine example from military history is the Battle of Trafalgar in 1805, says Gardiner.

"Nelson knew that if he tried to impose a dynamic plan on a fast-moving situation, he would fail. He also knew that he couldn't communicate during a battle, so he didn't even try. So he sat down before each battle with his captains and he invited them into his brain. They talked about the mission. They brainstormed it."

Leaders should be judged by the teams they build up beneath them and the central component of achieving this is trust.

"The absolute glue which holds it all together is trust. Trust upwards, downwards and sideways," he said.

Gardiner believes many bosses are frightened of giving people responsibility because they fear mistakes will follow. But they shouldn't.

"When I was commanding, I regarded exercises as a laboratory, as an experiment, a gymnasium. Provided safety wasn't compromised you could try out absolutely anything and I would never blame you for getting it wrong," he said.

With trust comes a workforce which is loyal, committed and proud of the organization and want it to flourish.

"You've got to understand where excellence comes from," he said. "It doesn't come because you've got excellent people -- there aren't enough around. Excellence comes when you get ordinary, normal people to give of their best.