Toyota president: 'We failed to connect the dots' 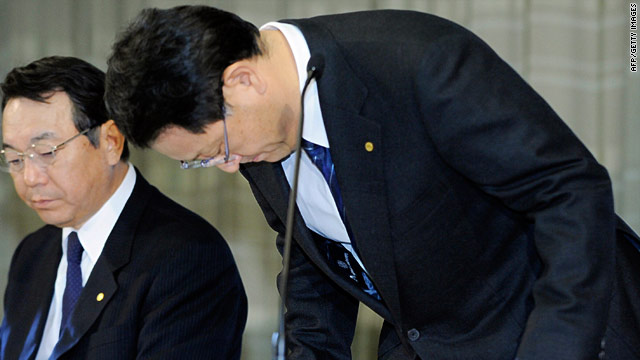 (CNN) -- In his most complete explanation of the problems that beleaguer Toyota, the company president said "we failed to connect the dots" with accelerator problems in the United States and Europe.

In an op-ed piece published Tuesday in the Washington Post, Toyota President Akio Toyoda also said the company will launch a blue-ribbon safety advisory committee, initiate a "top-to-bottom review of our global operations" and establish an "Automotive Center of Quality Excellence" in the United States.

Toyoda is on the offensive after he was widely criticized for making no public comments for nearly two weeks while recall problems escalated around the globe. In recent months, the company has recalled about 8.5 million vehicles for problems related to gas pedals and brakes.

His op-ed piece appeared the day before Toyota officials were scheduled to appear before the House Oversight Committee of the U.S. Congress. The Wednesday hearing has been rescheduled to later this month due to snow in Washington D.C.

Video: Cars hard to turn off

Video: Toyota complaints back in 2002

"When consumers purchase a Toyota, they are not simply purchasing a car, truck or van. They are placing their trust in our company," Toyoda wrote in the article. "The past few weeks, however, have made clear that Toyota has not lived up to the high standards we set for ourselves. More important, we have not lived up to the high standards you have come to expect from us. I am deeply disappointed by that and apologize.

"As the president of Toyota, I take personal responsibility. That is why I am personally leading the effort to restore trust in our word and in our products," he wrote.

Toyoda broke his silence on the issue by appearing at a Friday press conference on problems related to Prius, but he was widely lambasted for his stiff and awkward performance.

"The press here on Saturday just hammered him, saying it was 'too little, too late'," Jeff Kingston, director of Asian Studies at Temple University Japan, told CNN. Toyoda also appeared at a Tuesday press conference announcing the Prius recall.

In his article, Toyoda said the company needed to improve "sharing important quality and safety information across our global operations.

We failed to connect the dots between problems in Europe and problems in the United States
--Akio Toyoda, Toyota president
RELATED TOPICS

"This shortcoming contributed to the current situation. With respect to sticking accelerator pedals, we failed to connect the dots between problems in Europe and problems in the United States because the European situation related primarily to right-hand-drive vehicles," he wrote.

Indeed, much of the op-ed piece talked about improving communications within the company, with customers and with government regulators.

"Toyota will increase its outreach to government agencies charged with protecting the safety of motorists and passengers," Toyoda wrote. "I have spoken with U.S. Transportation Secretary Ray La Hood and given him my personal assurance that lines of communications with safety agencies and regulators will be kept open."

The company's slow response on the spiraling global problems is common among Japanese corporations, Kingston said.

"This incident really demonstrates how bad crisis management is in Japan. Hopefully, other companies are taking note and making plans to make risk management more than an after thought," Kingston said.

Toyoda didn't appear before the international press until the problems included Prius, the gas-electric hybrid that was the number one selling car in Japan last year.

The company officially recalled 437,000 vehicles, including the Toyota Prius and Sai, along with the Lexus HS250h, on Tuesday due to software problems related to brakes. It was the first time the spate of recalls included domestically sold Japanese cars.

"I think everyone has been taken aback by how badly (Toyota's) managed this crisis," Kingston said.

"A lot of suspicions point to management structure -- it's very difficult to get the information from down below, the people who know what's going on, to the people up above who are the public face of the corporation," Kingston said. "I think there is also a bit of cultural reticence to go against the consensus, against the design decisions and to give bad news.

"Japanese companies are oddly disconnected with their consumers," Kingston added. "I think this has to be an opportunity for Toyota to reconnect with their customers and I think generally for corporate Japan to stop resting on their laurels and regain some of the edge that made them world beaters in the 1980s."