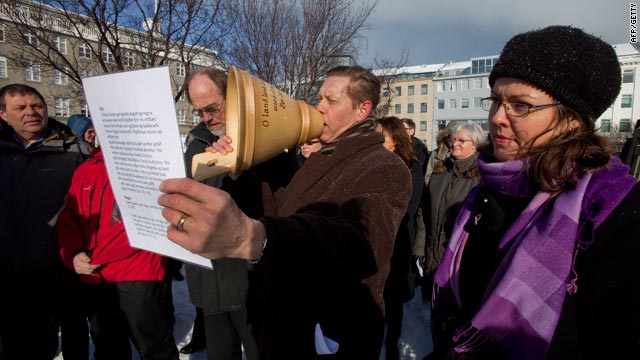 Icelanders gather to pray to 'bless Iceland' around the national flag in front of the Parliament in Reykjavik on March 3.
STORY HIGHLIGHTS
RELATED TOPICS

(CNN) -- Voters in Iceland on Saturday appear poised to reject a deal to pay billions of dollars to the Netherlands and the United Kingdom, which helped savers who were their own nationals who'd lost money in a failed Icelandic Internet bank.

According to preliminary results, about 93 percent of voters rejected the deal, which would pay the United Kingdom and the Netherlands more than $5 billion for bailing out people who lost money in Icesave -- an online retail bank branch of Landsbanki. That Icelandic bank failed in October 2008, along with two other banks.

Only 1.6 percent of the 74,000 ballots tallied so far were in favor of the deal, the country's foreign ministry said Saturday. Another 5.2 percent of the votes were empty ballots, the ministry said. About 200,000 people were registered to vote, it said.

Iceland's parliament passed a bill authorizing a state guarantee for repayment of the funds, but President Olafur Ragnar Grímsson declined to sign it in January. He cited public disapproval, and in particular, an Internet petition signed by up to one-quarter of the electorate, as a reason for not signing the bill. He said there needed to be a national consensus in addressing the issue.

"Of course we feel empathy for those people that lost money," he said. "We just want to get a more reasonable agreement," he told CNN.

"There are sovereign issues that ... would not be acceptable to any country," he said. "Also there is a staggering interest rate ... equal to running the national health care system for six months here in Iceland."

He called the collapse of the Icelandic banks during the world financial crisis of 2008-09 a "shared responsibility of Iceland, the UK and the Netherlands," blaming "financial regulators" in the countries.

It is not clear what will happen if voters say no to the loan guarantees.

The Icelandic government said it has "clearly stated its intention to honor its international obligations and remains fully committed to implementing the bilateral loan agreements with the UK and the Netherlands..."

Dutch Finance Minister Wouter Bos told CNN in January that nonrepayment of the funds would affect "the long-term interest of the Iceland economy and the Iceland people."

Britain's Treasury expects Iceland to live up to its obligations, it said in a statement in January.

The government of Iceland has for the past three weeks been engaged in a dialogue with the governments of the Netherlands and the United Kingdom, hoping for a resolution, Iceland's foreign ministry said Friday.

Iceland called the talks "constructive," adding that "Iceland is confident that a mutually acceptable solution can be reached.... and is hopeful that discussions will resume as early as next week."

Despite his refusal to sign the bill, Grímsson told CNN in January that "Iceland recognizes its obligations under this agreement."

Resolving the issue, he added, "is a key to our recovery and our harmonious relations with these countries."

The law on which Icelanders voted Saturday would compensate Britain and the Netherlands by 2024. A simple majority is needed for the bill to pass. About 300,000 people live in Iceland.